Inclusive is a word that we live by here at The OGM. We try to ask the  question each day, “how can we be more inclusive.”  It’s not always easy to be 100% inclusive but the answer for us came in providing a magazine that is inclusive with people, work, the arts…. and just plain inclusive in life overall.

At The OGM, we take pride in melding business, culture, people, and places altogether and to highlight life’s rich patterns and synchronicities through the senses! That’s why you will find Quote The Raven, integrated into the fabric of Energy + Culture.  Enjoy!

Beyond any reason, science, logic and the tangible there is music. We seem to find ourselves there.

This band’s music caught my attention right away. Then it was the name of their band, “Quote the Raven”.  New tunes with the wisdom of the ages: an eclectic duo that brings lyrics harmoniously to the chords of living.

“Winter is Evergreen” is my favourite song by this duo. It has smoky, alto-overtones that weave into perfect harmonies. That’s what Quote the Raven does. Jordan Coaker and Kirsten Rodden-Clarke take everything that is magical and beautiful about this grand world of ours and put it into easy-listening vibes for the soul.

We had the opportunity to get an inside look into the minds and hearts of Jorden and Kirsten and learn about their self-expression, music and vision. Here’s what they said:

THE OGM: What does Quote The Raven mean?

KIRSTEN: If we are being honest, it was the only name that stuck. Jordan had suggested so many band names and I just didn’t like any of them enough until I heard that one. He did originally suggest Quoth The Raven, because of the poem by Edgar Allan Poe, but I just thought we could make it a bit more modern. Thinking that a Raven has sung us these songs and we’re now quoting them is also a nice thought!

THE OGM: What’s the most inspiring thing about making music for you?

KIRSTEN: Personally I really like melodies. Words are important for sure, but I believe the melodies are what make people really feel it. Like poems, speeches, or songs in another language, the delivery needs to be there for you to truly enjoy it. I honestly just like making people feel something.

THE OGM: What song has been most successful?

KIRSTEN: Our single “Laser Beam” has definitely been the most successful. It has like 150,000 streams on Spotify. Jordan checks every few hours because he can’t believe it. I remember when Jordan first played it for me and I immediately loved it. We noticed the same thing happening when we started playing it for others. Which is a really good sign! Sometimes it can take a few listens before unfamiliar audiences start liking a new song, but this seemed to stick right away.

Rob Wells heard us sing it during MusicNL week in 2016 and offered to produce the single in Toronto and put a bit of his pop feel into it. That was the start of everything cool that has happened. Jordan wrote “Laser Beam” with Chris Kirby, who produced another version for the album, and asked singer/songwriter Sarah Slean if she’d like to do a string arrangement for the album version. So we now have two really cool versions of a song that we love!

We’ve been signed to Sound Of Pop Publishing (Halifax) who have been amazing and unbelievably helpful, and so many more things that have all stemmed from this song.

Sometimes you’ll create or hear a song, and just know it can go places. It’s rare, but we’re so happy to have that happen on our first full-length album.

THE OGM: What’s the vision for your musical careers?

KIRSTEN: I don’t think we ever really know how to answer that, but we’d love to have this be our full-time career. Something we can completely focus on. We’ve just always wanted to perform, sing and write. We’re trying to make it happen. Our audience keeps growing, and that’s really all we can hope for. We just want to reach the people who genuinely enjoy the music we play. Maybe do more festivals. Tour a different country. Just keep moving forward!

THE OGM: If artists hold the vision for the future, what does that say about your music?

JORDON: It says that the future is looking up and full of more collaboration. We’ve grown a lot dynamically as musicians and writers for our latest album and have only been growing since then! We know that there is so much power in collaborating together and growing together as a team and I think that applies to the world as a collective.

THE OGM: Where are ya from and how’d ya meet?

JORDON: We’re both from Conception Bay South, we met in 2011 in a vocal ensemble from there. The members of the group told us that our voices blended really well together and that we should sing together. Kirsten started joining me downtown for gigs after a bit of coaxing and we’ve been performing together ever since.

THE OGM: Where are your big gigs happening and when are you releasing the next CD?

JORDON: We’ve got a couple of bigger gigs lined up for the coming year that we can’t mention yet! But we can say that we’ll be on tour again this coming April touring around Eastern Canada!

THE OGM: If you could do one thing to make Newfoundland a better place what would it be?

JORDON: Oh god *thinks about starting a political rant*. We have some of the greatest bands on the go! I’m talking comparatively to some high-level bands around the world, but the opportunities here for some of them are lacking. We’re very lucky that our music can appeal to a broad audience, but a lot of rock bands or pop artists have a really hard time touring locally. I believe that Newfoundland has the potential to be a music hub similar to Nashville, or New York. That being said if I could I’d love to make Newfoundland a bit more financially accessible so that music business reps could come here and musicians could export out without spending an arm and a leg.

THE OGM: How do you feel we can elevate the music scene in Newfoundland.

JORDON: Word of mouth! If you like an artist, go to their shows. Tell everyone! Support them, wear their merchandise, follow their social media, share their posts and be friends with them. Seems simple but that’s really all it takes. That’s what we all need as artists.

KIRSTEN: I think we also need to believe we’re good enough. Newfoundland has amazing artists. I believe there are some of the best in the world here but they don’t think they can do it simply because not many Newfoundlanders have. We can. We all just need to keep pushing forward and getting ourselves out there.

THE OGM: What’s your music all about?

JORDON: A lot of personal experiences, you know the typical love and heartbreak themes. Our music also deals with things that some people don’t want to talk about, like death and life’s journey. We think it’s really important to feel the full gambit of emotions through music, not just happiness or sadness, but a little of everything.

KIRSTEN: The new album came about in a very different way than our first EP. We wrote it with 10 other artists in 4 days. It was cool to have different perspectives and stories to relate to and write about. Some about love, some about heartbreak. One about Newfoundland. There’s a little bit of everything but the album flows together nicely. We’re still trying new things and finding our sound. It’s a constantly evolving thing. 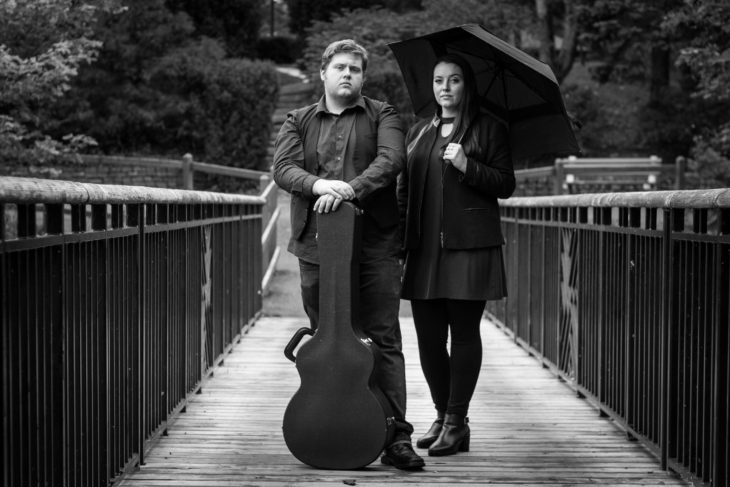 THE OGM: Can you share the lyrics of one of your songs and tell us about its journey.

Every street light captures your good side

We’re chasing the sunrise to the golden hour

And we’re making good time and the world is ours

The world is ours

I want to hold you now in the golden hour

Every day’s a minute. In every way, we’re in it.

Let me hold you now in the golden hour

Some people never learn about the golden hour

Take a picture cause life is quick burn

Everything’s clearer than ever before

Golden Hour was the first song we wrote during the writing camp. It was in January and we were in the middle of a snowstorm. Only so many writers could make it that day but we decided to go ahead and see what we could come up with. The lights went out and we sat around by candlelight and started writing. We get to the second verse and we’re trying to figure out the second phrase and we hear Monty, Chris and Victoria’s parrot, in the corner of the room yell “PLAY FREEBIRD.”  We’re still trying to figure out how to get a parrot songwriting royalties.

Go See them! Book Them! Google Them!