Way out there, 350 kilometres east of St. John’s on the Grand Banks of Newfoundland, in about 120 meters of water is black gold. With four major projects operating (Hibernia, Terra Nova, White Rose and Hebron), there’s promise of the next North Sea happening here as every oil project offshore Newfoundland has at least doubled if not tripled in size since its original discovery.

People who work on our offshore projects say that it’s a ‘dream come true’ and the highlight of their career because to be an engineer working on one of the greatest projects on the planet, is truly a privilege. These guys build castles in the sea.

When it comes to the world of oil discoveries and lucrative surrounding regions, White Rose is best-in-show. Its original predicted size is minuscule compared to what the full area potential is now showing decades later. That has been the trend for offshore Newfoundland. Every discovery has been a world-class project, a mega-find and always much bigger than originally thought. Because of this trend, these mega-projects have attracted some of the greatest companies to invest here and some of the greatest minds on the planet to come and work on them.

The life of White Rose has been fascinating. First, it was White Rose the original field which was discovered in 1984 with the N-22 exploratory well. Following the initial discovery, eight additional wells were drilled to define the structure which revealed 230 million barrels of recoverable oil. The first satellite field discovered was the South White Rose Extension. It was followed by West White Rose (2006) and North Amethyst (2006). All three of these fields have since been brought online, or are in progress. Fast forward a few years, and we have the A-78 discovery at Northwest White Rose (2017) and the A-24 discovery (2018) about 10km north of the SeaRose. Evaluation of both of these new opportunities is continuing.

As seen in the schematic, West White Rose, A-24 and A-78 discovery wells are relatively close to the ‘original’ White Rose field. The SeaRose FPSO (floating production, storage and offloading vessel) is located and produces oil from the original White Rose field.

The West White Rose oil field will produce oil with an entirely different method. Alternatively to an FPSO, it was found cost-effective to produce oil in this field with a concrete base structure (CBS). An island out at sea this giant castle will be made of a mammoth concrete base as the foundation of the platform with a mini town on top (the topsides). The platform will draw oil from below the seabed and bring it up the platform where it will then be shipped to sell on global markets.

The West White Rose concrete platform is currently being constructed at the Port of Argentia, in Placentia, Newfoundland. To give you an indication of the scale of the concrete gravity structure, it will take over two years to build, thousands of people will be employed on the project and its construction costs alone are over $3 billion. 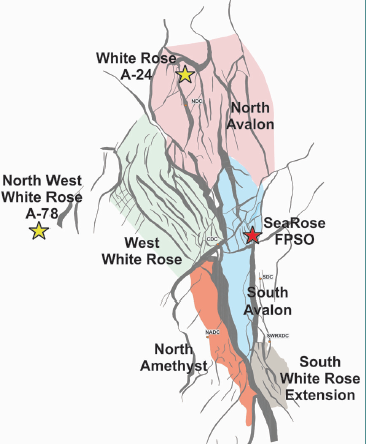 THE LASTEST DISCOVERY: A-24

The A24 well was spud on March 8, 2018, using the mobile offshore drilling unit (MODU), the Henry Goodrich. It was spud in a water depth of 126 meters. Husky Energy has spent the last two months drilling and testing the well. The well encountered approximately 85m of oil-bearing sandstones.

While it is a major oil discovery, the latest A-24 oil find is still in the evaluation phase. Husky Energy plans further delineation of A-24 and the North White Rose to get a better understanding of the broader opportunity in both of those findings. Results will be forthcoming as the company knows the full scope and scale of both of these lucrative opportunities.

Bets are on this project being highly successful, providing a very strong shareholder return of Husky Energy, a massive contribution to the economy of Newfoundland and the rest of Canada as well as providing much-needed work for contractors and suppliers.

We are thankful to Husky Energy for taking the risk and exploring in the region, and we are more than pleased that they are reaping its rewards. As a province and a country, we should be spudding some of our own wells given the track record of success in the region. State-owned companies, like Norway (Statoil), and Abu Dhabi (ADNOC). They did it right. They have the ticket to a sustainable future.