February 15th – The anniversary of the Ocean Ranger disaster

try me, try me, the waves did tout
try my winds against your doubt
take a chance and find the way
could you save a life along the way

but the sea she said it loud and clear
I am queen, and ye shall rise in fear
and yet they built and made the Ranger
blind to see the eminent danger

the people were angry, and the hearts were broken
the families left with a payment of the token
the fingers to point and the people to hate
of watery graves left the shadows of fate

and so they moved on with new safety regimes
the problems were analyzed there at the scene
the systems in place to fix all the wrong
How could this have taken so long? 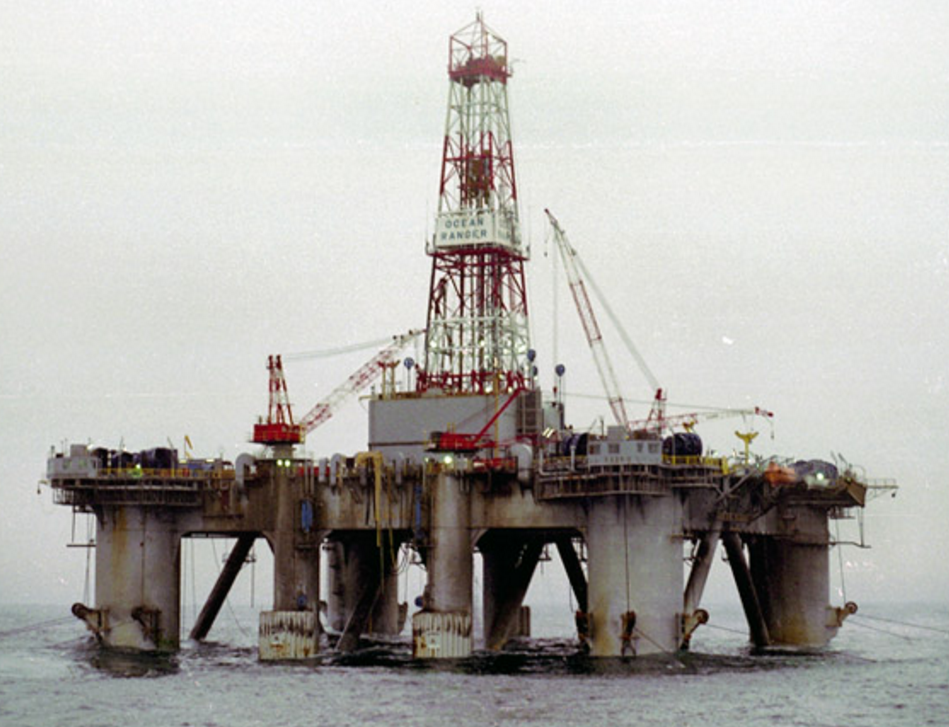 The Ocean Ranger owned by ODECO was hailed as unsinkable until it sank.

On February 14th, 1982, waves 50 ft high and winds of 90 knots, pulverized the grand banks.  About 8 p.m. a violent wave broke through a port hole in the ballast control room of the Ocean Ranger.  Saltwater caused the control panel to short circuit which ultimately had the rig list and forward. People were forced to evacuate and jump into the steely cold waters of the Atlantic.  All 84 workers died within minutes of exposure to the severe cold conditions of the water. Onboard there were 46 Mobil employees and 38 contractors from various service companies.  The entire Ocean Ranger platform sank beneath the Atlantic ocean.

At 00:52 a.m. local time, on 15 February 1982, Ocean Ranger sank in Canadian waters, offshore Newfoundland.  A Mayday call came from the Ocean Ranger, noting a to the port side of the rig and requesting emergency assistance. At 1:30 a.m. local time, Ocean Ranger transmitted its last message: “There will be no further radio communications from Ocean Ranger. We are going to lifeboat stations.” Shortly after that, in the middle of the night, in the midst of severe winter weather, the crew abandoned the rig. The rig remained afloat for another ninety minutes, sinking between 3:07 and 3:13 local time.

While it was the most modern and tolerant vessel of its time in the world, it still failed the fate of the ocean and her unpredictable perfect storms.

In the early 1970’s, the Labrador Shelf of Newfoundland and Labrador was a highly prospective exploration area.  First drilled in 1971, by dynamically positioned drill ships the region showed promise in the Jean d’Arc Basin on the Grand Banks.  1973 showed the first signs of oil and the mammoth Hibernia strike happened in 1976.  At this point in history, it became clear that offshore Newfoundland would hold the promise of very lucrative oil fields and a prosperous future.

The worst incident ever to happen in offshore drilling in eastern Canada was the Ocean Ranger disaster of 1982.  The Ocean Ranger, drilling the Hibernia J-34 delineation well carried a fate that could never have been foreseen for the times. Given the severity of this casualty, the industry was taken back and forced to re-examine operations and safety regimes which then let the way to enhanced safety operations of the future.  Safety quickly became the number one priority of the day.

Chevron drilled the Hibernia discovery well to earn a commercial interest in Grand Banks acreage held by Mobil and Gulf. The field is 315 km east-southeast of St. John’s was still hailed to be the gateway to the oil and gas future of the province. Between 1980 and 1984, Mobil drilled nine delineation wells in the Jean d’Arc basin. Eight of those wells were successful showing oil reserves at 625 million barrels which were about 40 percent more oil than originally estimated.  Today that has proven even more substantial than anyone had ever predicted with Hibernia South Extension.

To delineate Hibernia resources, engineering architects built the world’s largest oil platform – the Hibernia Gravity Base Structure (GBS) which sits on the ocean floor approximately 260 ft in depth with its topsides extending approximately 160 ft out of the water.

Hibernia gave way to other oil mega projects. Next discoveries included Terra Nova and White Rose in the mid-1980’s. These projects supported an infrastructure that led to new oil plays in the Jean d’Arc Basin and other basins.  The next project to come on stream offshore Newfoundland, in 2017 is the Hebron project.

It was the Ocean Ranger that lay the foundation for the success of Hibernia and we have those 84 souls to thank for the prosperity we have enjoyed and for what is to come.  Visionaries and pioneers, the people of the Ocean Ranger gave their lives for our oil and gas industry and for the future of our children.  Was it worth it?  Nobody can really say, but in the same way that a fisherman may lose his life to the sea, we can only have reverence and say we are sorry. And for your bravery, may you always know that we are deeply thankful.