Without shipping, the import and export of affordable goods and food would no longer be possible. As a result, without this important industry, half the world would freeze and the other half would starve. It is suffice to say that the shipping industry has a huge impact on the world’s overall economic health.

Shipping vs Other Modes of Transportation in Regards to Environmental Performance:

Overall, the shipping industry is extremely environmentally friendly. However, due to the sheer size of the large ships, they are still a contributor to the world’s total greenhouse gas emissions, claiming responsibility for around 3 percent of the total global CO2 emissions.  Consequently, the industry is always attempting to improve its overall energy efficiency, fuel usage and carbon footprint.

Ships That Are Leading the Way to a More Energy-Efficient Industry:

These ships are employing innovative technologies in an effort to become the most energy-efficient ship of its kind in the world. They are leading the way in the industry and setting an example that other shipping companies will attempt to emulate.

This 400-meter long cargo ship is the first of the new fleet produced by Maerk and is named after the company’s late owner. It is classified as a Triple-E class cargo ship. The triple-e stands for economy of scale, environmentally improved and energy efficient. This ship and the other 19 Triple-E vessels in the fleet are setting new standards in the industry for environmental performance and energy-efficiency, not to mention size.

One of the biggest reasons that this new ship is so energy-efficient is the fact that the engine is designed for a maximum top speed of 23 knots, which is slower by comparison to similar ships with a top speed of 25 knots. The minute difference in speed results in a 19 percent lower power output needed from the engine. This allows for slower engine revolutions and results in far greater fuel economy. 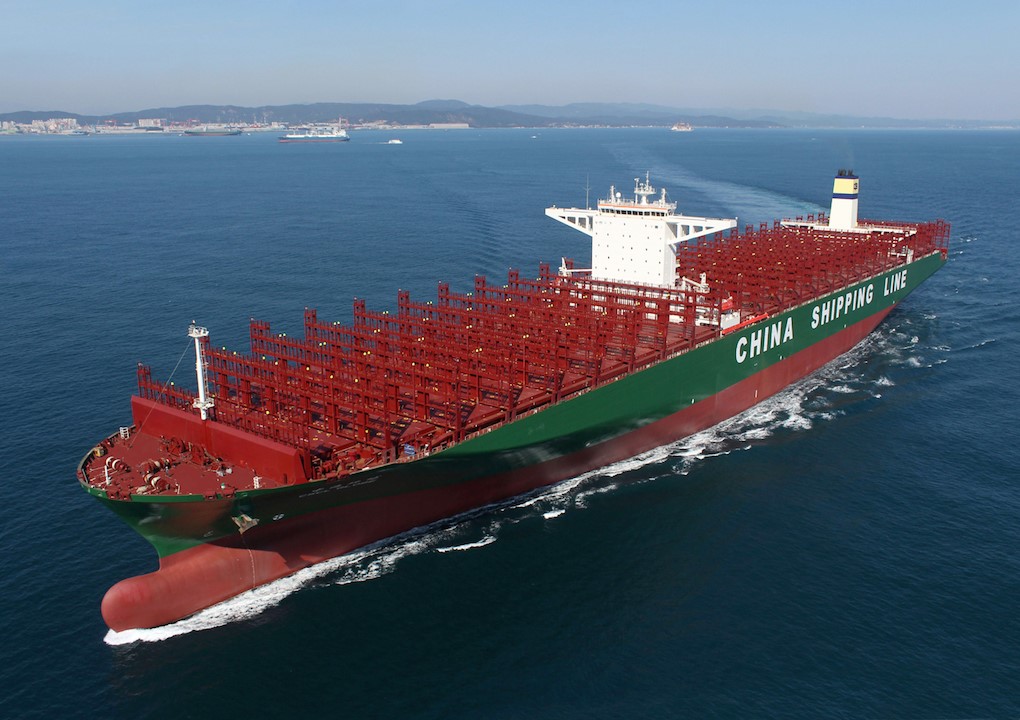 This amazing ship, owned and operated by the China Shipping Container Lines was the largest ship of its kind when it was launched in November 2014. It has since been dethroned as the largest ship by the MSC Oscar, but only just barely. The impressive energy-efficient features of the CSCL Globe make it worth mentioning, and although it is no longer considered the largest ship in the world, is still impressively enormous.

The CSCL Globe can carry 19,100 containers and is 1312 feet long and 192 feet wide. From its keel to deck, it is an amazing 100 ft. high. One might assume that its massive size would lead to a monster carbon footprint. Thankfully, due to the impressive technology aboard, this is not the case.

The main engine of the ship, which happens to be extremely large in and of itself at 56 feet tall, enhances the fuel efficiency of the ship by controlling fuel consumption. The fuel consumption is controlled based on sea conditions and the vessel’s current speed. As a result of this technology, the vessel burns 20 percent less fuel per TEU in comparison to other comparable container ships.  The engine is also designed to reduce noise and limit carbon dioxide emissions.

The Revolution of the Shipping Industry:

The sky is the limit in regards to the size and overall technology of transport ships of all kinds. Most of these ships rely on new engine technology to ensure they are more energy-efficient than the ships that came before. Of course, in the days of wind/sail powered ships, when it took months to cross the ocean, ships were most certainly more environmentally friendly than they are today. Unfortunately, the speed that the industry enjoys presently comes with a price tag, that being carbon emissions and an impact on the environment. However, without the speed, the affordability and access to needed products would be greatly altered. Thankfully, the shipping industry is now combining the best of both worlds, and coming up with new technology that allows ships to be both fast and large for today’s needs and environmentally friendly like those of yesteryear.