HYPERLOOP: I looked up and there was Elon Musk

“I looked up and there was Elon Musk right in front of me. He came to see the Hyperloop Pod at our booth. Nobody in our booth spoke because we were all really nervous. I remember saying in my Newfoundland accent to Elon, “How’s it going?”

“That started our conversation. Elon was very interested in what we were doing.  He was down to earth and really supportive.  He wanted us to enter the competition. It was without a doubt, one of the most exciting things that’s ever happened to me and it motivated all of us to come back and compete in the following year, which we did.  Elon Musk and my dad, have always been mentors to me.  They have inspired me to build companies and create influence to inspire teams to perform and work 40 to 50 hours a week and still go to school.  Clearly, it is possible to do incredible things,” proclaimed passionate inventor Adam Keating of the Newfoundland Hyperloop team. 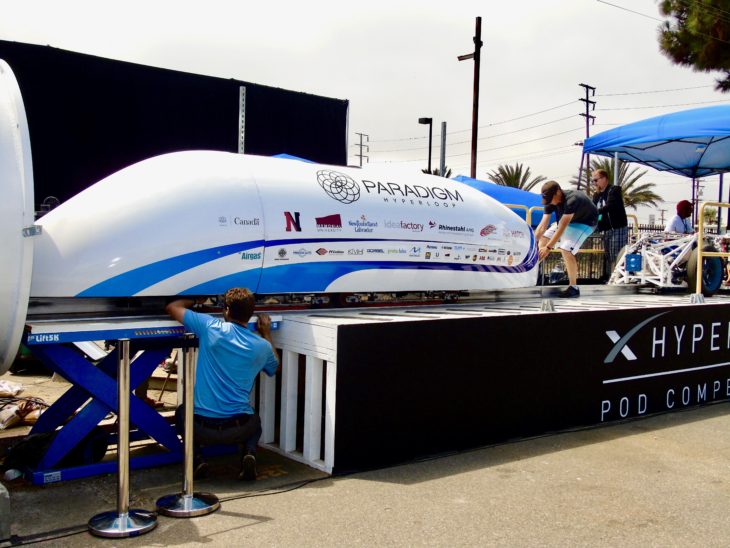 How would you like to travel from Toronto to New York in an hour, and still be on land?  Or how about leaving St. John’s and popping over to Corner Brook in 30 minutes? That’s the promise of Hyperloop. This transport technology uses air-bearing technology to transport a pod at super speeds from one place to another.

In Newfoundland, the students of Memorial University built the prototype model for what is fondly known as the “Paradigm Hyperloop,” which had them compete worldwide and place second in Elon Musk’s SpaceX Hyperloop competition in California. The winning team, Germany’s WARR Hyperloop, was designed to move at speeds of 324 kilometres per hour.

Adam said, “Two years ago I was working in the oil and gas industry for the first 3 years of my engineering program at MUN. The challenge was posted for Hyperloop and I looked into it, in July 2015. We were passive members of the team until we got in the design work moving and we went into the competition. By March I was the project lead and now I’m an advisor for the project. It’s been a really incredible ride.  The team here is incredible. We started with 10 members and now we are up to 150. We are all pushing hard to be in first place next summer when things will start happening commercially with Hyperloop.”

“The Newfoundland Paradigm Hyperloop team built a pod that was internationally recognized, weighs over 2,000 pounds, and floats on an air cushion in a steel vacuum tube.  Very much like an air hockey table, the puck sails across at elevated speeds with ease and grace.  That’s how Hyperloop transport works. The absence of friction allows for pod speeds to accumulate, making it far faster than cars and trains.”

What does this mean for mankind?

The technology is here and some of the greatest minds on Earth are embracing technology to bring transport to a game-changing level. Keating envisions Hyperloop systems being built in major cities like Los Angeles and Toronto first. Adam says, “I think being on this team and working on this project, I realized that being from Newfoundland, we have great talent here and we are doing incredible things. We really can do anything.”

If Elon Musk and the Paradigm Hyperloop team have anything to do with it, it won’t be too long before we are all travelling around in vacuum tubes, getting to destinations faster and easier.  Imagine the possibilities…