This Stephenville Industrial Park has been showing growth and exciting opportunities for the whole area. With the recent, major expansion of the Northern Harvest Smolt hatchery and the purchase of the metal recycling yard by Newco Metals of St. John’s, the Port of Stephenville is looking forward to a prosperous future, one that will benefit the whole west coast of the province of Newfoundland and Labrador. 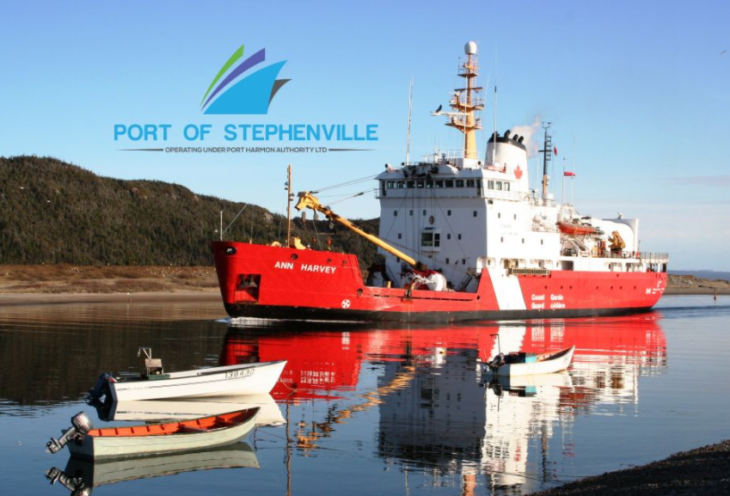 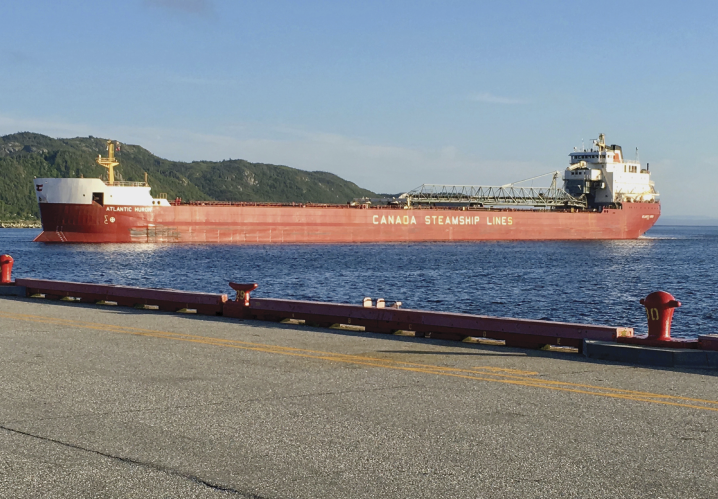 Port of Stephenville operates year round and is a sheltered, deep sea and ice-free port. The quay is 293m x 20m, with 7500 sq m of asphalt paved dock area. The depth is 10.1m at dockside. It can accommodate ships up to 385m in length. The turning basin has a 450m turning radius, and has access to 2 boom cranes, a jib crane and 3 different capacity forklifts of up to 8000 tonnes, to facilitate loading and unloading of containers and cargo at dockside. The 100,000 sq ft Port of Stephenville Warehouse Building is newly refurbished and has three 30 ton overhead cranes. Warehouse, Inventory and port operations personnel are available. In 2015 the management of Port of Stephenville was taken over by Theresa Keeping and Dale Merkel, with another investor from Alberta. They are the same people who originally financed the expansion and revitalization of the port. Since then there has been growth and exciting opportunities for the whole area and the business has grown from two employees to ten. With the recent, major expansion of the Northern Harvest Smolt hatchery and the purchase of the metal recycling yard by Newco Metals, the Port of Stephenville is looking forward to a prosperous future that will benefit the west coast of the province. 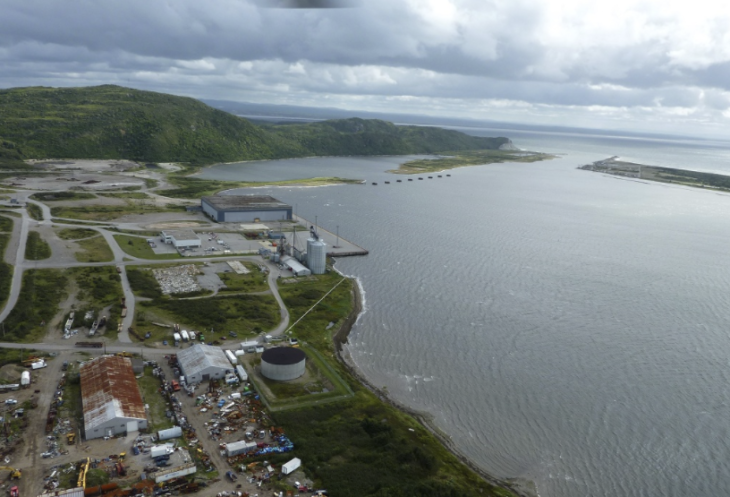 The port operates year-round and is a sheltered, deep sea and ice-free port with a large paved dock and lay down area as well as an adjacent 380-acre industrial park. There is 24/7 tug service at the port also. The Port of Stephenville envisions itself as an important link in local and regional supply chains and has real potential as a more efficient and reliable alternative entry port for containerized freight and perishable goods. The port is well situated to serve the West Coast and Labrador resource industries and supply storage and transhipment for projects such as the Muskrat Falls project.

In 2016 the Port of Stephenville entered into an agreement with the international company Duegro to store materials and equipment from ABB used in the power transfer across the Maritime Link to Nova Scotia as part of the Muskrat Falls megaproject. The port is using the adjacent 100,000 square foot, newly renovated warehouse to receive and store the equipment as well as arrange the transportation to the power transfer site at Bottom Brook. This warehouse was formerly used by Pennecon to accommodate steel fabrication for Hebron GBS, a multi-million-dollar contract.

Newco Metal and Auto Recycling Limited is the largest, oldest, and the only province-wide metal recycler in Newfoundland and Labrador. The Company was established in 1992 and operates a metal and auto recycling business throughout the entire province. 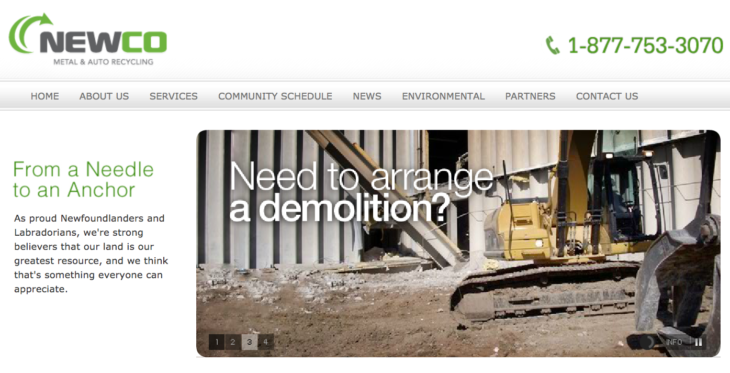 Sixty full- and part-time staff dedicate their time and resources to the cleanup and recycling of car wrecks, scrap metal, and white goods province-wide. Recovered metal goods collected from various client sites throughout the Province are screened for environmental and health hazards. Then materials are compacted, loaded, and transported via truck and marine transport to recycling markets both within the province and mainland Canada. Licensed contractors assist Newco in the recovery and disposal of restricted and hazardous wastes. 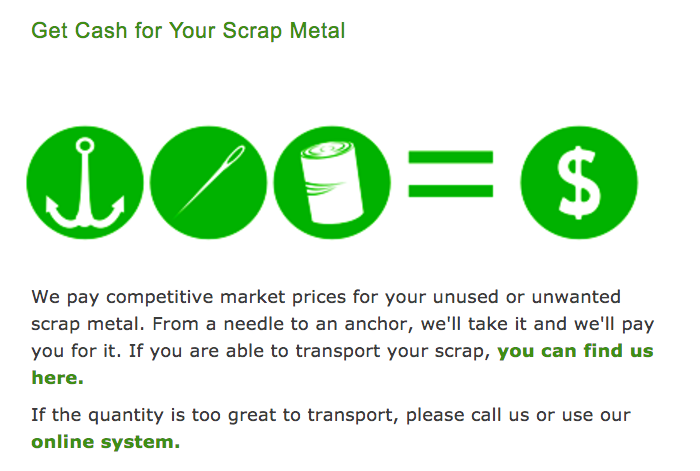 In 2011, under the new ownership and management of Bob Anstey, Newco started to reinvest in the company and expand into the future. In 2012, Newco purchased a building and property for a metal recycling collection facility in Happy Valley, Goose Bay.  Also in 2012, Newco opened a heavy metal storage/export yard in Argentia.  In 2013, Newco purchased an existing facility in the Corner Brook region (formerly Rods Auto Salvage), which now operates at the Watsons Pond Industrial Park. In July 2016, Newco purchased the former Newfoundland recycling facility on Incinerator Road off the Foxtrap Access Road. This location is being operated as a metal collection facility and will be the home of the company’s shredder operation. 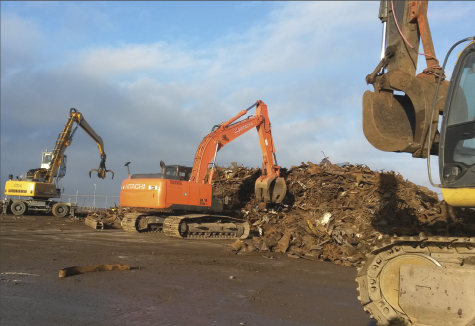 NEWCO AT THE PORT OF STEPHENVILLE

Recently, strategic growth plans saw Newco purchasing former K&J Metals in Stephenville. They rebranded the facility as Newco Stephenville, and plan to continue to operate from the Port of Stephenville. Newco staff are presently running a car crusher and a baler on the site to process the scrap metal. Road tractors have been contracted to transport that material to markets on the mainland. At the same time staff are sorting the heavy scrap metal on the site for future export to world markets.

To properly clean the property and prepare it for future operations Newco has to remove all metal from the land. Then Newco equipment will reshape, level, and grade the property to increase the functionality and efficiency of the facility.

A big part of Newco’s business is heavy scrap and P&S (Plate and Structural) scrap metal. Presently, all that material gets trucked to Argentia for shipping to markets in Europe and Asia. Part of Newco’s plan for the Port of Stephenville site is to stockpile the material that is collected until volumes have amassed sufficiently for sale in world markets. This makes the Port of Stephenville an ideal location as it is strategically located on global trade shipping lanes and lucrative world markets.

Northern Harvest Sea Farms Group is the world’s first salmon aquaculture company to achieve four-star Best Aquaculture Practices (BAP) status.  This signifies that the company’s salmon processing plants, farm sites, hatcheries and feed mills, are all BAP certified through the Global Aquaculture Alliance. This makes Northern Harvest the first salmon hatchery in the world to earn BAP certification since new BAP hatchery standards for finfish, crustaceans and molluscs were completed in September 2014. The hatchery itself is one of the largest in Canada and currently includes 3 buildings measuring a combined 8,825 square meters.

Eggs are received eyed from brood stock reared in Prince Edward Island at another Northern Harvest Sea Farms owned and operated hatchery. The eyed eggs are delivered to the hatchery in Stephenville where they are incubated for a short period of about 75 days. The incubation area can hold about 10,000,000 salmon eggs. Once the eggs hatch, the process of moving the fry begins. They are held in 34 m³ rearing tanks that contain approximately 400,000 fish. The fish are graded for size throughout the year. During each grading period, the fish are transferred to progressively larger rearing tanks until they reach the larger 280 m³ smolt tanks in the smolt buildings.

Throughout the rearing season, great effort is taken to minimalize stress on the fish thereby providing a healthy environment for growth. The salmon will spend 18 months growing into salmon parr and eventually into healthy salmon smolt ready to be transferred to marine sites. During the spring and fall, Northern Harvest Smolt Ltd. transfers fish to Northern Harvest Sea Farms marine sites in South-Eastern Newfoundland for on-growing, until they reach market size. Currently, Northern Harvest Smolt Ltd. will produce 3.5 to 4 million Atlantic salmon smolt each year.

In December of 2016, Northern Harvest Sea Farms announced they would spend $6 million on expanding the salmon hatchery at the Port of Stephenville. This expansion will include an additional smolt building, upgrades to backup power and oxygen supply as well as upgrades to its wastewater management systems. Work is scheduled to begin in July 2017 and the additions will be operational as early as the spring of 2018. This expansion will provide rearing space for an additional 1.5 million smolt, increasing overall production by 6,000 tonnes of market product each year. The expansion to operations in Newfoundland and Labrador will bring the company’s total salmon production to about 22,000 tonnes annually.
For more information: www.northernharvestseafarm.com