Invited to the Table: Energy East Pipeline Feeds a Nation

Nothing could be more exciting for Canada than learning that one of North America’s leading energy infrastructure companies has invited all its citizens to share in the benefits of its most ambitious pipeline project to date. On August 1, 2013, TransCanada announced its intent to build the Energy East Pipeline, a $12-billion project that will involve converting a portion of the company’s Canadian Mainline natural gas pipeline into a west-east conduit for crude oil.

Energy East is preparing to tap the keg of prosperity to serve a nation with the promise of interprovincial commerce, job creation, and realizing better value for Canada’s natural resources, Energy East aims to provide greater market access for Canada’s energy industry by literally connecting its provinces, with receipt points in Alberta and Saskatchewan, to provide refineries in Montreal, Lévis, and Saint John’s with crude oil from Western Canada, as well as create export terminals in Québec and New Brunswick.

In reference to the results of the “Open Season,” an industry term inviting commercial interest in the pipeline, Russ Girling, TransCanada’s president and CEO. said, “This response confirms the overwhelming industry support for innovative solutions to move crude oil to markets in Eastern Canada and to elsewhere in the safest, most efficient means possible, which is in a pipeline.” He adds that Canadian refiners are eager for access to Western Canadian supply, as of most what they refine now is imported from overseas for the production of gas, diesel and other carbon-based fuels.

At the same time, TransCanada is reassuring residents of Ontario and Québec that they will continue to receive the natural gas they require, and that the cost of natural gas transmission in those provinces does not increase as a result of Energy East. 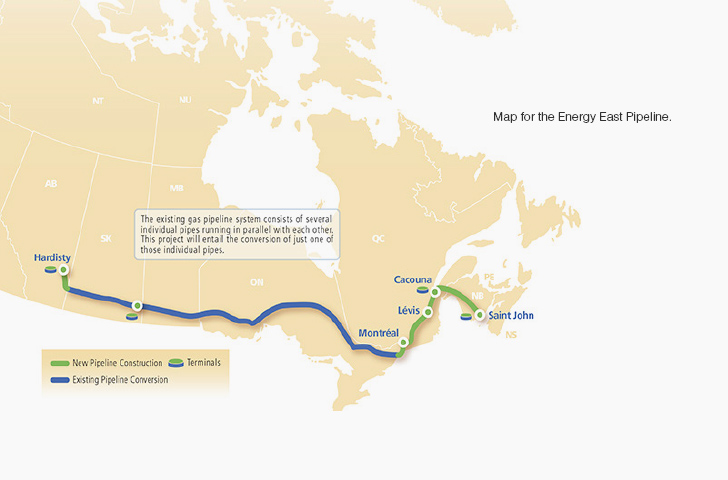 “Energy East will give new purpose to the underutilized capacity of our Mainline, making it more competitive and attractive for our natural gas customers,” say’s Girling. “We are committed to maximizing the utilization and benefits of our infrastructure for all customers –gas and oil–and we are committed to ensuring sufficient capacity is available to meet all their growing needs.”

Details of the Project:

Approximately 180 First Nation and Métis communities currently live along the proposed pipeline route. According to Alex Pourbaix, president of Energy and Oil Pipelines, “these
residents, like all of our estimated 100,000 stakeholders on this project, will be consulted extensively about their concerns and their insights into local conditions and local circumstances … their advice will help us select the best possible route for this pipeline.”

It seems one of the loudest cries heard inside all arenas within the energy industry is the environmental cry. TransCanada is doing its very best to assure all concerned that Energy East will work with all parties involved, while fielding all concerns as they relate to the pipeline. “Seventy percent of the needed pipe for the project is already in the ground and does not need to be dug up for this conversion to occur,” says Pourbaix.

TransCanada plans to replace existing compressor stations along the converted Mainline portion with pump stations. These pump stations will be powered by electricity and will have no direct emissions, meaning they will have minimal environmental impact –a consistent theme with Energy East.

Numerous studies have proven the safest way to transport oil is via a pipeline. In 2012 alone, TransCanada invested $1-billion in pipeline safety and integrity programs to ensure the safety of its assets and the environment in which they operate.

With broad support expressed for Energy East from politicians across the country and around the political spectrum, optimism for Energy East is high. Sound rationale aside, TransCanada as a corporation has a very large task ahead. The company plans to file its formal application for the project with the National Energy Board next year, with hopes that it will be able to begin construction on the pipeline in 2016, followed by service beginning in 2017 to Québec and 2018 to Saint John’s.

Energy East is just one of the $38-billion in pipeline and power generation projects underway for TransCanada. This ambitious company can only hope that its other big projects will receive such a congenial reception from Canadians.

TransCanada is a leader in the responsible development and reliable operation of North American energy infrastructure.