With asset utilization critical and community and regulatory pressure always looming, it is essential that tank farm owners proactively prevent any loss of containment with reliable, cost-effective corrosion protection.  This is crucial since atmospheric corrosion is one of the main culprits of tank leaks, containment loss, and early replacement.

As oil depots and terminals are often comprised of ample pipeline through which to draw product, it is also vital to address corrosion under insulation (CUI), which can cause serious problems including forced shutdowns, lost production, etc.  CUI, which involves the corrosion of vessels or pipe beneath insulation due to water penetration, is insidious because it can remain undetected until leaks occur or the insulation is removed for inspection.  Consequently, dealing with CUI and inspecting for it are very costly.

Fortunately, by addressing a few important considerations regarding corrosion, tank farm owners can stop corrosion and CUI for years to dramatically extend tank and pipe service life.  In doing so, they can also improve safety, reduce downtime, and expedite maintenance turnaround. 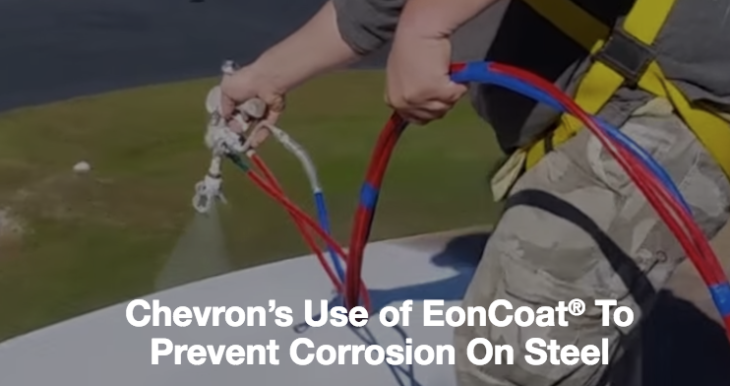 Tank farm corrosion protection typically involves applying polymer paints and rubber type coatings.  Such methods create a physical barrier to keep corrosion promoters such as water and oxygen away from steel substrates.  However, this only works until the paint is scratched, chipped, or breached and corrosion promoters enter the gap between the substrate and coating.  When this occurs the coating can act like a greenhouse – trapping water, oxygen and other corrosion promoters – which allows the corrosion to spread.

Instead, as a better alternative, a growing number of the world’s largest petrochemical companies with tank farms are finding success with an innovative approach toward stopping corrosion.

To extend the service life of tank farm assets, including those already experiencing atmospheric corrosion, owners and facility managers are turning to a new category of tough, Chemically Bonded Phosphate Ceramics (CBPCs) that can stop the corrosion, ease application, and reduce production downtime even in very wet, humid conditions.

One example of this is EonCoat, a spray applied inorganic coating from the Raleigh, North Carolina-based company of the same name.

In contrast to traditional polymer coatings that sit on top of the substrate, the EonCoat corrosion resistant CBPC coating bonds through a chemical reaction with the substrate. The surface of steel is passivated as an alloy layer is formed.  This makes it impossible for corrosion promoters like oxygen and humidity to get behind the coating the way they can with ordinary paints.

Although traditional polymer coatings mechanically bond to substrates that have been extensively prepared, if gouged, moisture and oxygen will migrate under the coating’s film from all sides of the gouge.

By contrast, the same damage to the ceramic coated substrate will not spread corrosion because the carbon steel’s surface has been chemically transformed into an alloy of stable oxides.  Once the steel’s surface is stable (the way noble metals like gold and silver are stable) it will no longer react with the environment and therefore cannot corrode.

Visible in scanning electron microscope photography, EonCoat does not leave a gap between the steel and the coating because the bond is chemical rather than mechanical.  Since there is no gap, even if moisture was to get through to the steel due to a gouge, there is nowhere for the moisture to travel.  This effectively stops atmospheric corrosion on carbon steel assets. 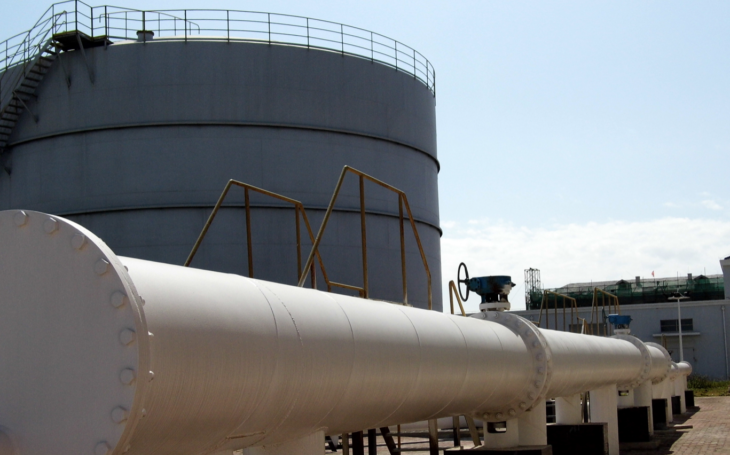 Corrosion Under Insulation (CUI) is the root cause of many of the global petrochemical industry’s most serious problems including forced shutdowns, lost production, early repair and replacement, as well as safety and environmental consequences that can cost millions of dollars per incident.

“CUI is the silent killer,” explains Merrick Alpert, President of EonCoat.  “The insulation creates a terrarium on the steel in which corrosion is guaranteed to occur if traditional coatings are used. And the insulation then hides the corrosion from being detected until it’s too late.”

Pipe is particularly susceptible to mechanical damage from shipping, installation, or facility operation that may breach traditional coatings and accelerate CUI.

Because of the risk of CUI, a dedicated team is often required to inspect vessels or extensive piping on a virtually continuous basis.  However, removing pipe insulation and spot-checking that portion of pipe does not eliminate the risk of CUI along the entire pipe network at the tank farm.

As an alternative that helps to curtail this costly inspection and maintenance cycle, a CBPC coating like EonCoat provides a corrosion barrier that is covered by a ceramic layer that further resists corrosion, water, impact, abrasion, chemicals, fire and high temperatures.

In this way, the ceramic layer provides a tough outer coating that dramatically reduces mechanical damage and any potential breach of the coating.

The CBPC coating’s chemical bond further ensures that even if moisture were to get through to the steel due to a gouge, it would travel no farther than the boundaries of the gouge.  This quality effectively prevents the hidden spread of corrosion, which is arguably the most insidious aspect of CUI. 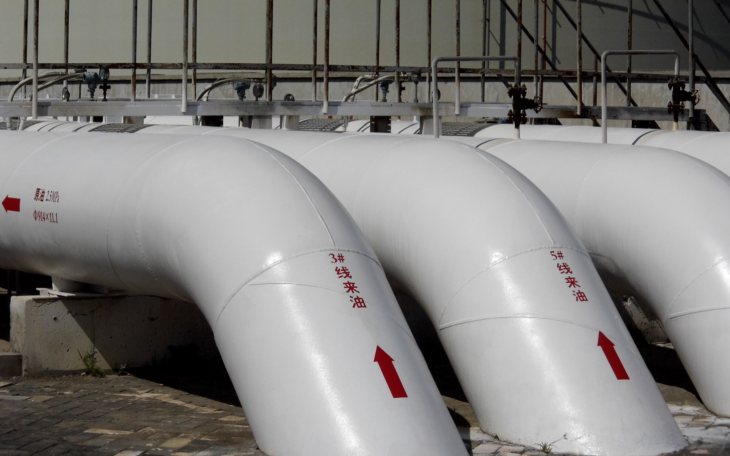 One of the greatest benefits of the CBPC coating, however, is the rapid return to service that minimizes facility downtime.  The time saved on an anti-corrosion coating project with the ceramic coating comes from less surface preparation, the elimination of the intermediate coat and expedited curing time.

With a typical corrosion coating, near white metal blast cleaning (NACE 2 / SSPC-SP 10) is required to prepare the surface.  But with the ceramic coating, only a NACE 3 / SSPC-SP 6 commercial blast is typically necessary.

Furthermore, with traditional coatings, extensive surface preparation is required and done a little at a time to avoid surface oxidation, commonly known as ‘flash rust’, which then requires re-blasting.

However, with the CBPC coating, the flash rust is no issue.  There is no need to ‘hold the blast’.  The reason for this unique CBPC characteristic is due to the presence of iron in the rust, which helps to create the magnesium iron phosphate alloy layer.  It is this alloy layer that allows CBPCs to so effectively protect carbon steel from corrosion.

For traditional ‘three-part system’ coatings utilizing polyurethanes or epoxies, the cure time may also be days or weeks before the next coat can be applied, depending on the product.

In contrast, a corrosion resistant coating for carbon steel utilizing the ceramic coating in a single coat requires almost no curing time.  Return to service for tank farms can be achieved in as little as one hour, which can potentially save hundreds of thousands of dollars per day in reduced facility downtime. 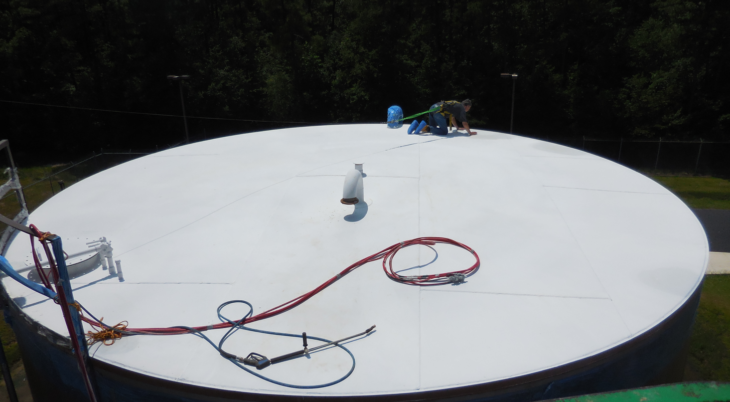 For petrochemical tank farms with massive carbon steel structures, corrosion and CUI have been a costly, perennial problem.

Now, however, by proactively using best in class anti-corrosion products like CBPC coatings, facility managers will be able to deter corrosion and CUI for decades, reduce downtime, and postpone tank and pipe replacement, all of which will significantly help the bottom line.