Today 80% of the developed world’s energy comes from fossil which meets energy demand, but these fuels present environmental issues and climate change challenges.

By 2050, it is predicted that the population will be 9 billion and there will be a dramatic increase in energy consumption for which no one solution will be able to fill its demand.  A new energy mix will prevail offering new and sustainable solutions for energy security, sustainable development and environmental protection. Future energy supply options may comprise of a new energy mix including fossil fuels, nuclear fission, fusion, and other renewable energy sources.

According to CCFE, the Culham Centre for Fusion Energy, “Fusion could have a key role to play in the energy market of the future, with the potential to produce at least 20% of the world’s electricity by 2100.”

The Answers Are Found In Nature

Believing that the answers are found in nature, fusion may prove that theory correct once again. Fusion is the dominant source of energy for stars in the universe as well as on Earth.  It’s speculated that fusion energy could be the basis of energy which may some day take us to the stars in space travel.
Nuclear – means the process which involves the nucleus.
Fusion – means two or more entities merging together to form one single entity.

The sun is a powerful force. It produces energy through a process called fusion. The sun is made of atoms and its incredible gravity force pulls atoms together. These suns atoms or “light atoms” come together they “fuse” to make an entirely new heavier atom. That’s fusion.

Fusion occurs when two light atoms bond together and make a heavier one. The total mass of the new atom is less than that of the two that formed it. This gives way to a “missing” mass which creates energy.  This fusion phenomenon was described by Albert Einstein as the “E=mc2” equation.

High temperatures and pressures are required to force a fusion reaction to take place. Temperatures must reach approximately six times that found in the core of the sun. At this extreme heat, the hydrogen atom is no longer a gas but a plasma. It is a high-energy state of matter where electrons are stripped from their atoms.

Fusion differs from fission, which splits atoms and results in substantial radioactive waste, which is hazardous.

At the International Atomic Energy Agency, Scientists have been studying the sun’s energy in the hopes of replicating its fusion capacity.  Through technological innovation the goal has been to build reactors which could emulate the sun’s energy source, thereby creating a renewable clean energy solution for world energy demand.  The agency believes in a global united approach where the world’s leading scientists collaborate to find the answers to fusion.

ITER means “the way” in Latin. The construction of the ITER test fusion reactor at Cadarache in the South of France is the first significant step towards nuclear fusion the world has seen. The ITER Project is ranked among the most ambitious science endeavors of our time. The building is underway now on the ITER scientific installation in Saint-Paul-lez-Durance, France.

35 nations are collaborating to build the world’s largest tokamak, a magnetic fusion device that has been designed to prove the feasibility of fusion on a large-scale, replicating the nuclear fusion process that happens on the Sun. 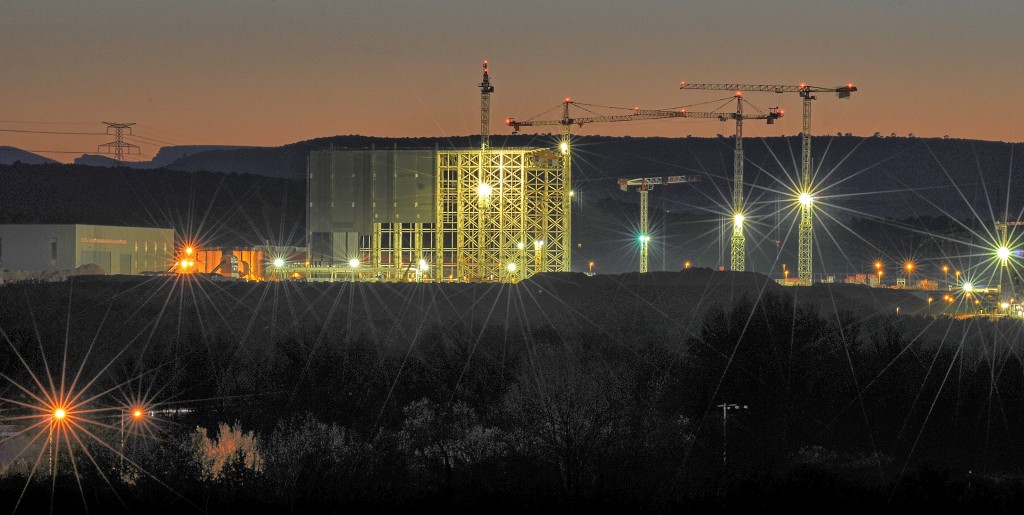 The ITER construction site at night

100,000 kilometres of niobium-tin (Nb3Sn) superconducting strands are necessary for ITER’s toroidal field magnets. Fabricated by suppliers in six ITER Domestic Agencies—China, Europe, Japan, Korea, Russia and the USA—production began in 2009 and is currently drawing to a close. Over 400 tonnes of this multifilament wire has been produced for ITER at a rate of about 150 tonnes/year, a spectacular increase in worldwide production capacity (estimated, before the scale-up for ITER, at a maximum of 15 tonnes/year). Stretched end to end, the Nb3Sn strand produced for ITER would wrap around the Earth at the equator twice.

The heaviest components of the ITER machine will be shipped to the nearest Mediterranean port and then transported along 104 kilometres of specially modified road known as the ITER Itinerary. The dimensions of these components are impressive: the heaviest will weigh nearly 900 tons including the transport vehicle; the largest will be approximately four storeys—or 10.6 metres—high. Some will measure 9 metres across; others 33 metres long. 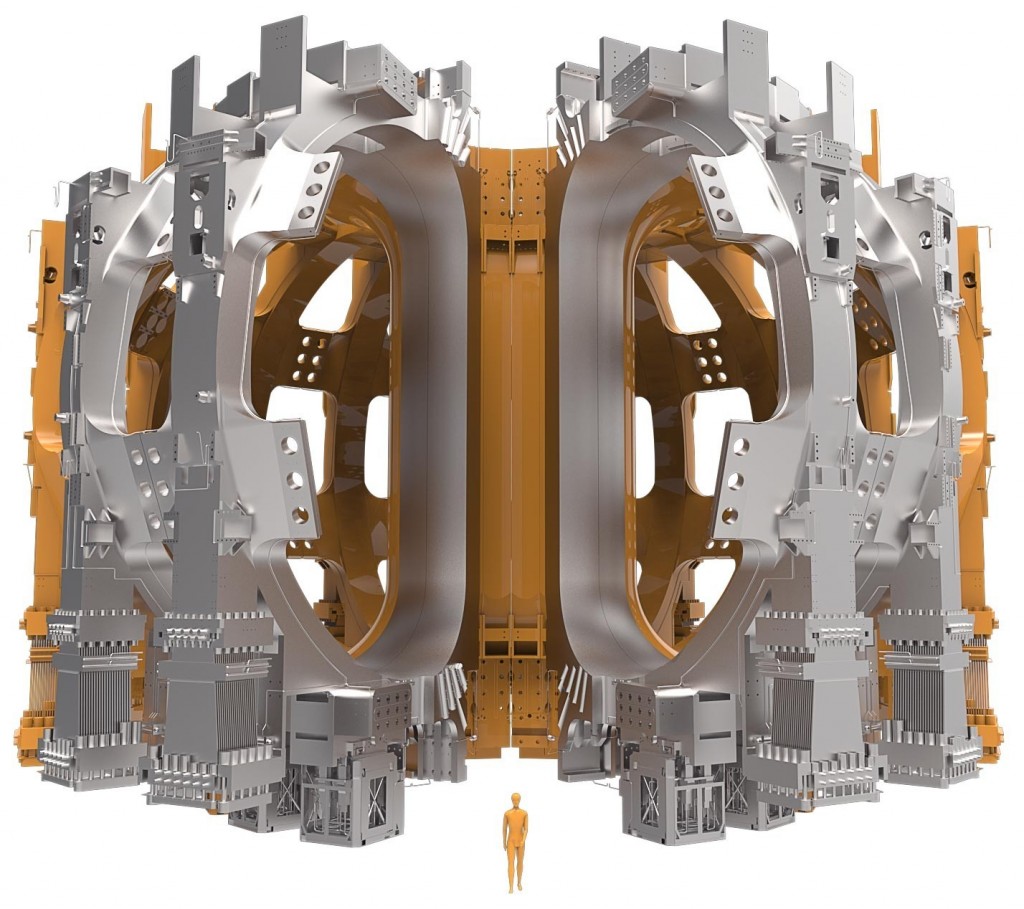 The ITER machine will weigh 23,000 tons. The metal contained in the Eiffel Tower (7,300 tons) can’t compare … the ITER Tokamak will be as heavy as three Eiffel Towers. The vacuum vessel, with its ports, blanket and divertor, weighs 8,000 tons. Approximately one million components will be integrated into this complex machine.

2X THE THRUST OF A SPACE SHUTTLE LIFT-OFF

The structure of the ITER central solenoid—the large, 1,000-tonne electromagnet in the centre of the machine—must be strong enough to contain a force equivalent to twice the thrust of the Space Shuttle at take-off. That’s 60 meganewtons or over 6,000 tonnes of force.

The main feature of the 180-hectare ITER site in Saint Paul-lez-Durance, southern France, is a man-made level platform that was completed in 2009. This 42-hectare platform measures 1 kilometre long by 400 metres wide and compares in size to 60 soccer fields. Building began in August 2010.

At the peak of ITER construction in 2018-2019, 5,000 people are expected at ITER (on the worksite and in the offices), up from 1,400 in 2014. The projected rise is due to a sharp increase in the number of construction workers on the platform.

The goal of the ITER fusion program is to produce a net gain of energy and set the stage for the demonstration fusion power plant to come. ITER has been designed to produce 500 MW of output power for 50 MW of input power—or ten times the amount of energy put in. The current record for released fusion power is 16 MW (held by the European JET facility located in Culham, UK).

The Tokamak Building will be slightly taller than the Arc de Triomphe in Paris. Measuring 73 metres (60 metres above ground and 13 metres below), it will be the tallest structure on the ITER site.

Visits are open to all (contact the ITER Joint Visit Team at visit@iter.org).

ITER will be the last stage of the construction of the DEMO industrial demonstration model, planned for 2040.

Scientists and policymakers around the world are convinced that we are on the edge of an ‘Age of Fusion’. Constructing thirty-nine buildings and technical areas to house the ITER Tokamak and its plant systems is a monumental undertaking. The integration and assembly of over one million components (ten million parts), built in the ITER Members’ factories around the world and delivered to the ITER site constitutes a tremendous logistics and engineering challenge. An assembly workforce of approximately 2,000 people will be needed at the height of assembly activities.

The ITER project is not unlike the mega projects we’ve seen in developing the Hibernia project offshore Newfoundland as well as other mega oil and gas projects in the North Sea.  As oil and gas give way to renewable energy infrastructure, it is wise to assume that developed infrastructures could parallel and support each other in the development of a new energy mix.