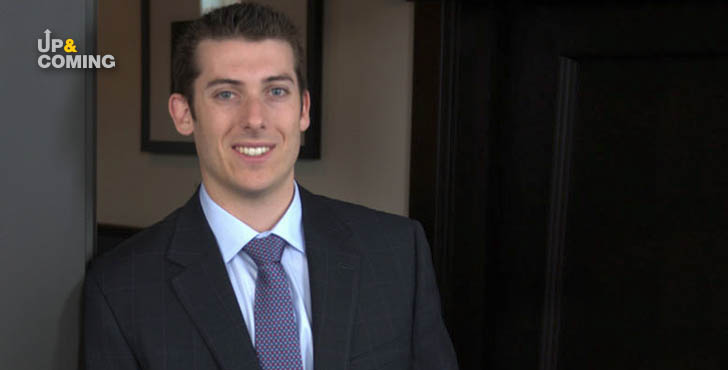 Frank J. Ryan is a true Newfoundlander, spending much of his youth playing hockey, his guitar and sharing good times with family and friends—more often than not, in the kitchen. He excelled through his schooling, and completed an honors earth sciences degree from Memorial University of Newfoundland, where he is also currently completing a master’s degree in business administration. He’s always been amazed at the worldwide influence of the oil and gas industry, which has led him to pursue a career in geosciences to learn the fundamentals of hydrocarbon exploration.

After working two summers in Calgary, Frank chose a career starting in his hometown with Chevron. His primary focus, living on “The Rock,” is on producing the offshore Hibernia Asset, while he maintains several industry organization, and community, volunteer initiatives, including head of the East Coast Young Professionals AAPG network. When it comes down to it, Frank always keeps Henry Ford’s words in mind, “Whether you think you can or you can’t, you’re right.”

Frank: Sustainability is rooted in economics, social responsibility and the environment. It is only with a balance of each that companies can succeed. In particular the oil and gas industry has to be interested in its public image keeping in mind safety and giving something back to the communities they operate in, as well as do their earnest to respect the environment while meeting energy demands. Moving forward, I see natural gas as a bridging fuel in the future until fully renewable technologies are developed and industrialized to meet Global energy needs.

Frank: I’ve had many mentors. First of all, Chevron has a well developed new hire program where we are assigned technical mentors and bridging mentors for transfers. In my young career, I’ve had the privilege of working with many experienced mentors thus far, and I can’t help but sponge whatever knowledge I can from them.

Frank: Health and happiness are always at the forefront for me. Part of those things comes from our jobs of course. So, in the OnG industry, I want my impact to increase recover rates, reduce dry wells and reduce the environmental footprint in the industry through sound technical work. I intend on promoting efficient work habits while bearing in mind safety is above all else in work and play.

Frank: Challenging, Rewarding and of course, Safety above all else.

Frank: Go for it. If you want to see the world, face new challenges working with people from around the globe then this is the job for you. As a geoscientist, I often say that we usually have the four corner pieces of a puzzle and have to interpret what’s in the middle. We use state of the art technology, firm technical knowledge and our imaginations every day to do just that.

Frank: My industrial career is short, but academically my crowning achievement was winning the Canadian Imperial Barrel Award and representing Canada at the world competition at the American Association of Petroleum Geologists (AAPG) Conference.

Frank: Many of the challenges we are faced with have to do with risk. As alluded to above, many of the projects we work on have less than perfect data. This can be both worrisome and inspiring in my opinion, and we must always keep an open mind and gauge the risk versus return to the best of our ability.

Frank: Technology has started to take the human-to-rock connection out of interpretation as many of us geoscientists spend most of our time behind a computer and not in the field. Now while technology has helped immensely with interpretation and analysis ability and sped up the process, many new fields are unconventional and require a deeper understanding of geologic processes. Most of the easy oil has been found and to understand more difficult plays we must keep looking at the rocks in the field and in core and not fully rely on the technology crutch.

Frank: Eventually I’d like to move into management, but for the next five years I’d like to learn as much as possible technically and see as many fields as possible. In doing so, I hope to be more prepared for my transition to management.

Frank: Not at all. At many young Canadians, I wanted to be a hockey player. After that dream withered (at about 12 years old) I decided I wanted to be a financial advisor like my father. When it came time for university though, I wanted to do biochemistry and medicine. As I enrolled in my first year courses I took earth sciences as an elective and was captivated instantly and never looked back. It was a winding road, but I couldn’t be happier I stuck with it.

Frank: The Energy Industry is arguably the most influential industry in the world. It’s that worldwide influence that amazes me, and it instils a drive in me to become a leader to help us transition into a bright, safe future.

Frank: I’ve had many role models over the years, and I believe you can learn something from everyone you meet. I always tried to keep that in mind in academia and industry, as there are so many bright people out there I haven’t limited myself to just one role model, yet anyways. Also, my parents and my older brother were always a big influence in my life; they really guided me through thick and thin, teaching me positive core values of honesty and work ethic.

Frank: Energy, in a purist sense, is a fundamental building block of all things both tangible and intangible, including life, matter and our economy; without it the world would stop working. Therefore, Energy means everything to me. I feel that helping produce a safe and long lasting source of commercial Energy to communities is a meaningful and fulfilling contribution to society.

Frank: Call me old fashioned, but I haven’t made the jump from a cell phone to a smart phone yet…so perhaps my favourite app is the ‘telephone’ app.

Frank: Ideas. Millennials are an idealistic generation that have the numbers and educational background to take the energy industry into a bright future. The Millennial Generation embraces change and are the first true digital natives. We should expect great technological advances, use of multi-faceted media approaches and a heavy reliance on communications. All that being said we can never forget to look at the rocks, because computers can’t yet imagine or think the way we can on outcrops! Finally, we have the opportunity to advance like never before with so many of the baby boomers set to retire in the coming years, and to whom much is given much is expected – Luke 12:48.

Frank: Social media and keeping up with technology is becoming quintessential as the ‘Global Village’ becomes smaller. And as exciting and useful as it is to keep up to date on events happening all over the world in real time, I still put a high value on face-to-face communication, as it is oftentimes a lost art.

Frank: I use Facebook and LinkedIn on a daily basis. They are brilliant tools to keep in touch with friends as we move apart in our lives and careers, as well as a great opportunity to build professional networks.

Frank: Chevron takes part in several social media avenues to release and promote public campaigns and materials. However, I don’t use it directly for work.

Frank: I think it’s a useful device for networking purposes, and if it helps job seekers find suitable employment then I fully support it!

Frank: I love what I do because of the global reach of my team’s, and my company’s, decision making. My work drive’s more accurate well’s with less risk promoting safety, efficiency, cost savings and minimizing environmental effects. I love having the opportunity to see the world, and work with some of the brightest minds from all over, on some of our civilizations greatest projects.