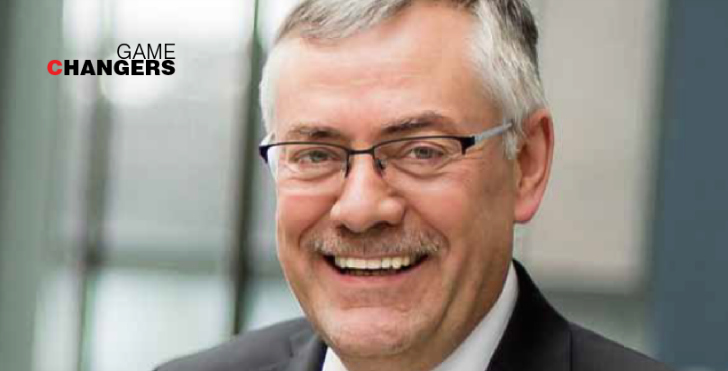 Gerald Anderson was born in the community of L’Anse aux Meadows on the Great Northern Peninsula of Newfoundland and Labrador – population today 16. A beneficiary of Nunatsiavut, Gerald’s family roots go back to Makkovik, Labrador.

A graduate of Memorial University, Gerald started his career in the fishing industry, later working with the federal government, before joining the Fisheries and Marine Institute. Now almost thirty years at Memorial, Gerald has seen and been part of a significant change in the marine industry. Reflecting on his career, Gerald says, “When I started in this business Newfoundland and Labrador had almost no offshore oil industry. We had some offshore exploration ongoing, but no development or production. I work on the education side of the oil industry, and I was fortunate enough to be part of the growth of the Marine Institute, growth to respond to the needs of Newfoundland and Labrador, and enable Newfoundlanders and Labradorian’s to prepare for the new emerging careers in the oil and gas industry.”

“When I started with the Marine Institute some 90% of the ship’s Officers working in the Newfoundland offshore were non-Newfoundlanders, today I’m told some 90% of the Officers are from Newfoundland and Labrador. I like to think I played a small part in that transition”, Gerald says. He certainly has played a significant role, in the early 90’s Gerald assisted over 100 former deep sea fishermen gain employment in the new and emerging offshore oil industry.

The OGM: Describe a typical day in your life.

“There is no such thing as a typical day anymore because my position is so diverse. In addition to my position here at the Marine Institute. I’m also Vice President Indigenous for the University of the Arctic. Here at the Marine Institute I deal mostly with senior officials in both levels of government and spend a lot of time working with aboriginal groups, not only within Newfoundland and Labrador but also Nunavut and Nunavik.

The OGM: What is it that makes you most passionate?

I’m most passionate about the success of others. It is a great feeling to see a person succeed in a marine career, a career that they thought was impossible for them, but somehow I played a small part in helping them through the process.

The OGM: What do you get to accomplish in your career?

I have had a very successful career working on the education side of the marine industry. I’m most proud of the work I’ve done with aboriginal groups both here at home and across Canada. Many aboriginal beneficiaries now work in the marine industry and I would like to think I played a small role in that. I’m also proud that others have taken what I may have stared and improved on it greatly.

The OGM: How do you make your contribution?

I took a different approach to education and training for the marine industry. I’ve always been a strong supporter of community-based education. While the idea of community-based education is certainly not mine, I did play a role in taking the program offerings of the Marine Institute outside “the overpass” and into the communities of rural Newfoundland & Labrador and beyond. A large number of the senior ship’s Officers today started taking marine training this way and have built a very successful career because if it.

The OGM: What do you feel is the future of the oil and gas industry in NL?

There is a bright future for the oil and gas industry in Newfoundland and Labrador. Like all extractive industries there will always be up and downs. We have a commodity that the rest of the world will always want. We have a well-educated, professional workforce, working in a global industry.

The OGM: Who is your mentor?

I’ve had several mentors in my lifetime but if I had to name just one it would be my grandfather. He died before my career started and he influences not so much what I do but certainly how I do it. He never had the opportunity to attend school one day in his life but he certainly knew the value of education. He was a man with great respect for others, he exuded integrity and always deep consideration for others. When I grow up I want to be like him!

Success to me is having a career with no regrets. I love my job. I’ve helped many build their own careers and is what has allowed my career to flourish. I feel that I am only successful when others succeed.

The OGM: What makes a game changer?

I never think of myself as a game changer. In my career, I’ve been fortunate to work with many great people. I share my recognition with all my colleagues. I’ve been recognized national and internationally for the work I do…I received the 2015 Indspire Award (formally known as the National Aboriginal Achievement Award), the highest honor given by the aboriginal community in Canada. In 2016 I was appointed Vice President Indigenous for the University of the Arctic…a network of 170 universities and research institutions from around the world. While I now work internationally I’m most proud of the work I do here at home.

The OGM: If you were speaking to the next generation, what advice would you give for success in a career?

Start your career on a good foundation, get an education. Nobody can ever take that from you. Work hard, work smart and from day one develop and practice a good work ethic.

Spread the word about Gerald Anderson!