350 kilometers southeast of the capital city, St. John’s, Newfoundland, the White Rose field sits at the edge of the Jeanne d’Arc Basin. Nothing but ocean and skyline, this foggy cold region of the Grand Banks is a diamond in the mist.

The development of White Rose and its subsequent fields has been the work and vision of Husky Energy (68% partner owner) and its partners Suncor (26%) and Nalcor (5%). White Rose partners have seen nothing but gains from the White Rose project as it has provided oil producing returns from a number of fields in 2005, 2010, and 2015, with much more to come.

The original White Rose field was developed using subsea technology, consisting of three drill centres tied back to a Floating, Production, Storage, and Offloading (FPSO) vessel. The initial development of the White Rose project utilized a 21-well system that was tied back to the FPSO, meaning oil was pumped up to the seabed surface to drill centers on the ocean floor. From there oil then flowed up through a subsea production system of flow lines that were tied back or connected to the vessel. Since the initial oil production success, three field extensions have produced oil. North Amethyst was the first subsea tieback that started producing oil in May 2010. The South White Rose subsea tieback achieved first oil in June 2015. Both projects produce oil and deliver it back to the SeaRose FPSO. 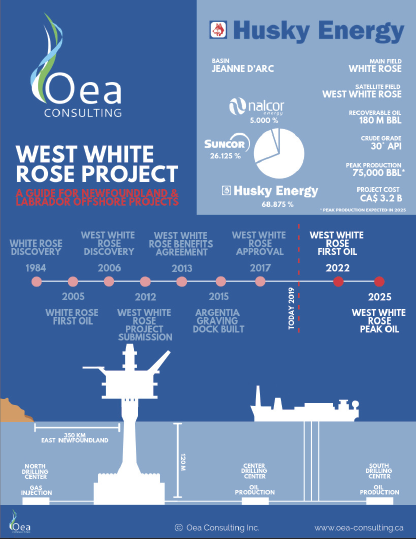 The West White Rose project will access further resources to the west of the field, using a fixed drilling rig tied back to the existing SeaRose FPSO. That platform is a mega world-class initiative and is being constructed in Argentia, Newfoundland right now. First oil is expected in 2022.

The concrete gravity base and topsides of the platform will combine to become the first of its kind offshore Newfoundland – a super platform. It is an innovative technological concept that requires ingenious precision and brain power to construct it and bring it to its resting place at the West White Rose field.

This state-of-the-art platform was chosen because it has improved drilling efficiency, reduced weather downtime, lower operating costs and greater resource recovery potential. It is an island in the sea.

The platform has an overall height of 145 meters and a total weight of 210,100 tonnes. It will take more than 7.5 million person-hours for engineering and construction and will require approximately 800 workers at Argentia during peak construction. 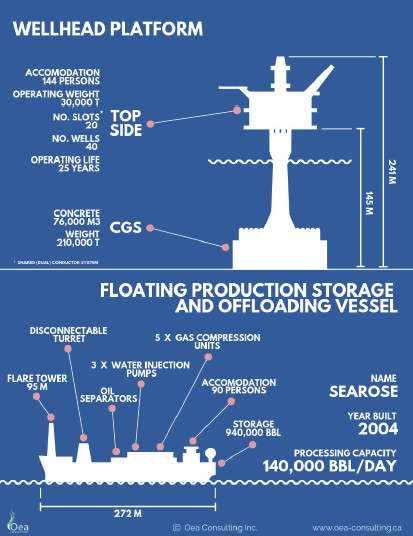 As of May 2019, work continued to progress on all fronts of the West White Rose platform including on the Topsides at Ingleside, Texas and locally on the Living Quarters module in Marystown and the Concrete Gravity Structure (CGS) in Argentia.

Husky Energy has a strong safety and quality record across all its sites, largely attributable to their dedicated workforce.

In Argentia, they spent the first part of the year working on the interior of the CGS where rebar was placed and conductor guides installed.

Concrete works began in April 2019, with the lower dome concrete pour, the upper ring concrete pour, and the first of three quadrant slips planned for 2019.

The three quadrant slipforms won’t make the CGS any higher. These are the perimeter quadrants and will be slipped to the same height of 46 metres. Each of the slips can take up to 40 days.

First steel was cut on the Living Quarters in October 2017 and the project is now about 54 percent complete.

Contracts for the lifeboat stations, helideck and flare boom will be awarded this year.

In February 2019, Husky announced a change in the tow out and installation schedule, moving it from summer 2021 to summer 2022. This decision was made following one of the regular risk reviews. While Husky considered accelerating work to maintain the 2021 weather window, it would have resulted in substantial cost escalation without guarantee of success. 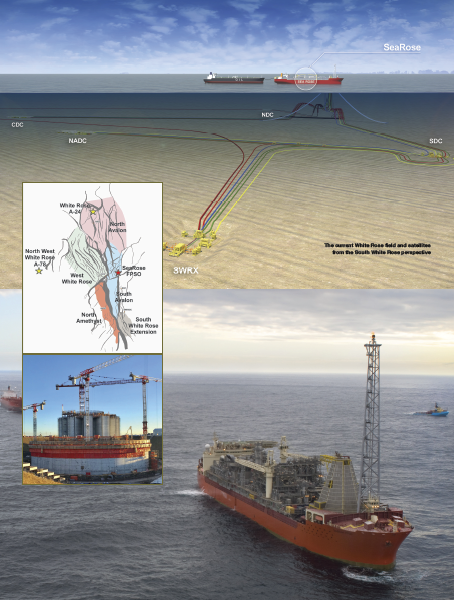