US Pipeline Network Is Expanding

Opposition to oil and gas pipelines produces sensational headlines.  Protests of the Keystone XL, Dakota Access, and numerous smaller projects are well-covered by the media, creating the impression of an industry halted by public outcry. But the US pipeline network is steadily expanding and safety is improving.

Construction efforts for oil and gas pipelines have long faced opposition from local residents who don’t want a pipeline near their community. But over the last decade, opposition expanded from local to national, involving protesters concerned with supposed impact on the climate and the global environment. Pipelines are no longer opposed for only NIMBY (Not in My Backyard) reasons, but increasingly for NOPE (Not on Planet Earth) reasons. 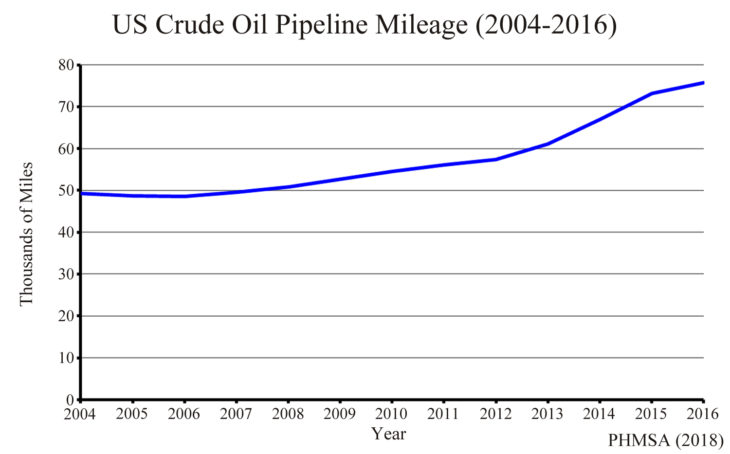 Keystone XL pipeline opposition is a well-known example. The Keystone XL was originally proposed in 2008 to carry petroleum from the Canadian oil sands, Montana, and North Dakota to US Gulf Coast refineries. Environmental groups, citizens, and politicians attacked the project, warning that the pipeline would harm water supplies and increase global warming.

Global warming environmentalist Bill McKibben was arrested in front of the White House in a Keystone XL protest. Senator Barbara Boxer warned that the pipeline would cause cancer in more Americans. In November 2015, President Obama rejected the project, stating, “America is now a global leader when it comes to taking serious action to fight climate change. And frankly, approving this project would have undercut that global leadership.” In January 2017, President Trump reversed the Obama rejection and signed a memorandum to advance the Keystone XL, which should begin construction later this year.

The Dakota Access Pipeline, a project to carry crude oil from North Dakota to southern Illinois, was announced in June 2014. The pipeline was opposed by Native Americans and other local groups, but also national and international groups including Amazon Watch, Black Lives Matter, and Greenpeace. St. Louis, Minneapolis, and 17 other cities passed ordinances opposing the pipeline. Celebrity Leonardo di Caprio, Senator Bernie Sanders, and even United Nations officials called for a halt to the pipeline.

In the spring and summer of 2016, a camp of over 3,000 protestors developed in the path of pipeline construction in Cannon Ball, North Dakota and received international media coverage. But between September 2016 and January 2017, the camp was cleared by police with about 200 protesters arrested. The pipeline began operation in May 2017 and now transports over 500,000 barrels of oil per day.

With rising protests backed by sympathetic media coverage, one might conclude that the US pipeline network is in decline, but this is not the case. Pipeline networks are expanding and increasingly used to safely transport oil, oil products, natural gas, and volatile liquids such as ethane, butane, and propane. 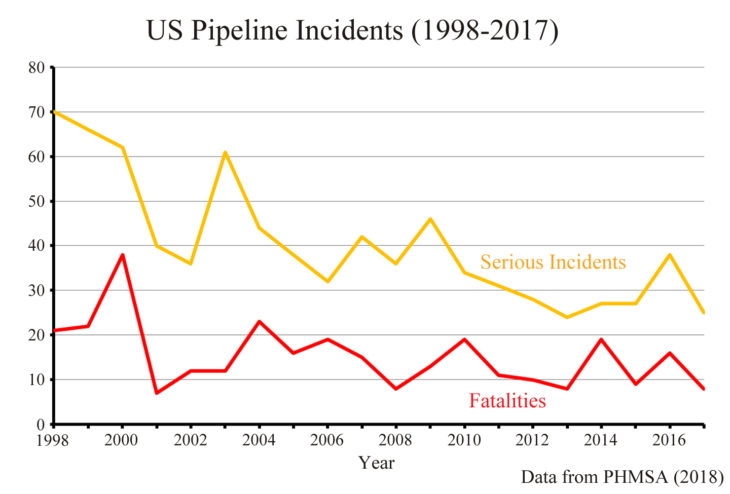 Driven by increased oil production from the fracking revolution, US crude oil pipeline mileage increased from 49,000 in 2004 to over 75,000 in 2016, according to the Pipeline and Hazardous Materials Safety Administration (PHMSA). But many locations need still more pipeline capacity. Petroleum output is rising so fast in America’s largest oil field, the Permian Basin shale field in West Texas, that pipelines can’t handle it all.

The pipeline network for distributing natural gas to homes and businesses is also growing steadily. Data from the PHMSA shows that gas distribution main and service pipeline mileage grew 80 percent from 1984 to 2016. Gas pipeline mileage continues to steadily expand, despite “electrification” efforts aimed at reducing the use of natural gas and propane in California and New York.

PHMSA data also shows that the number of serious incidents and fatalities experienced by US pipelines is down roughly 50 percent since 2000, despite the expansion of oil and gas pipeline networks. US residents have about double the chance of dying from a lighting strike than a pipeline accident.

New England is the only region where opposition has prevented most pipeline construction during recent years. Earlier this month, New York Governor Andrew Cuomo rejected the proposed Constitution Pipeline, which planned to bring fracked gas from Pennsylvania to the New England pipeline network.

In February, when supplies of gas were tight, Massachusetts imported liquefied natural gas from Russia, needed to heat homes and generate electricity. Massachusetts Attorney General Laura Healey admitted that she would rather import gas from Russia than build a new gas pipeline to her state. Meanwhile, New England residents pay the highest electricity costs in the continental United States, and these prices are rising.

With the exception of the New England region, pipeline opponents have failed to halt the growth of US pipeline systems. Oil and gas pipeline networks continue to expand with improving safety, while delivering increasing amounts of petroleum, petroleum products, and natural gas to US residents and businesses.

Steve Goreham is a speaker on the environment, business, and public policy and author of the book Outside the Green Box: Rethinking Sustainable Development.