Vineyard Wind has leased a 160,000-acre area south of Martha’s Vineyard and 14 miles from the nearest shore.  The location was determined through a multi-year, inter-governmental task force process, which carefully considered scientific data and public input. The offshore wind project will consist of an array of wind turbines, spaced at least eight-tenths of a mile apart, that are each capable of generating over 8 MW of power.  Power from the turbines is collected by an offshore substation.

Submarine cables will be installed along a carefully designed route from the project site to a landing point on shore, buried up to six feet below the sea floor. The route has been designed after an extensive geological survey of the area to avoid as many sensitive areas as possible.  The upland cables will be buried along proposed routes in either Yarmouth or Barnstable.

Connection To The New England Grid

From the onshore cable landing site, the route will extend to the grid connection point inland. The route will run underground primarily along public roads, but also includes segments within other previously disturbed corridors such as an existing utility right-of-way. After the initial installation, all maintenance work will be accessed via installed manholes.

Two route options are under consideration: one in Yarmouth and one in Barnstable. Both route options have variants that offer additional benefits or can help further reduce costs. 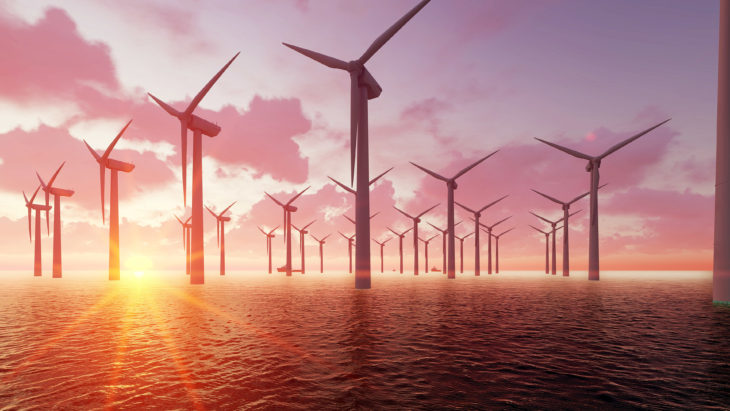 Vineyard Wind is a joint venture of Avangard Renewables, a subsidiary of AVANGRID Inc. (NYSE: AGR) which is majority owned by Iberdrola S.A., and Copenhagen Infrastructure Partners (CIP) each of which owns 50 percent of Vineyard Wind.

“Vineyard Wind’s partners are eager to deliver an offshore wind project that will provide the Commonwealth with abundant clean energy resources for decades to come,” said Laura Beane, President and CEO of Avangard Renewables. “Today’s announcement serves to further illustrate the AVANGRID companies’ commitment to delivering value and opportunity in a region that is determined to address complex energy challenges through significant investments in clean energy infrastructure.  Avangard Renewables is excited to play a substantial role in the Vineyard Wind joint venture, which is poised to support hundreds of Operations and Maintenance jobs and create thousands of construction jobs while launching an exciting new industry in Massachusetts.”

“The Vineyard Wind team is honoured to be chosen to provide clean wind energy for communities across Massachusetts,” said Torsten Lodberg Smed, Senior Partner with Copenhagen Infrastructure Partners. “CIP is committed to continuing to move forward with our plan to make Vineyard Wind the first operational large-scale offshore wind project in the United States. Backed by the proven global leadership of our joint venture partners in the global and domestic offshore wind sector across three continents, our team will deliver a utility-scale offshore wind project that will stimulate tremendous economic development opportunity on Cape Cod, the Islands and the South Coast.”

Under Massachusetts law, the selection of Vineyard Wind by the EDCs and Department of Energy Resources (DOER) allows all parties to begin negotiations to secure all necessary transmission services and power purchase agreements to facilitate the delivery of offshore wind electricity to Massachusetts customers. Once satisfactory contract terms are secured, those documents will be submitted to the Massachusetts Department of Public Utilities for formal review as set forth in the in the 83C process.

Vineyard Wind is the only offshore wind farm developer to begin both the state and federal permitting processes by filing an Environmental Notification Form (ENF) and Construction and Operations plan in December 2017. Vineyard Wind’s early timeline was designed to maximize the abundant environmental, economic and energy benefits associated with utility-scale wind energy for Bay State residents and businesses. Vineyard Wind will continue to refine the project design and approach as it receives additional comments from regulators and stakeholders. Vineyard Wind received a significant volume of substantive and productive comments from the fishing industry, residents on Cape Cod and the Islands, environmental organizations, as well as regional economic and community-based stakeholders, during the initial ENF comment period.

Vineyard Wind has been especially focused on receiving input from the fishing industry and has already held more than 100 meetings with fishermen or fishing organizations since 2016. Input from those meetings is reflected within the project design as part of a broad-based effort to ensure that offshore wind facilities and the fishing sector thrive together in the decades ahead.

With the passage of An Act to Promote Energy Diversity in 2016, Massachusetts required the state’s EDCs to procure 1,600 megawatts (MW) of clean, offshore wind energy within the next decade, resulting in intense competition among offshore wind leaseholders for long-term contracts with utilities in Massachusetts. The addition of 1,600 MW of low-carbon wind generation capacity will provide enough clean, homegrown energy to power the equivalent of more than 750,000 Massachusetts homes every year.

Vineyard Wind recently took another significant step in its effort to build the first large-scale offshore wind farm in the United States by submitting the project’s Draft Environmental Impact Report (DEIR) with state regulators. The filing advances the company’s proposal to construct an 800-megawatt (MW) wind farm 15 miles south of Martha’s Vineyard while maintaining Vineyard Wind’s early timetable to begin construction in 2019 and become operational by 2021. When completed, the Vineyard Wind project will reduce Massachusetts’ carbon emissions by over 1.6 million tons per year, the equivalent of removing 325,000 cars from state roads.

Vineyard Wind’s proposal committed $15 million to three initiatives designed to make Massachusetts the centre of the American offshore wind industry. The commitment includes a $10 million Wind Accelerator Fund to accelerate the development of an offshore wind supply chain, businesses, and infrastructure in the Bay State by attracting investments to upgrade or create necessary facilities and/or infrastructure. The $2 million Windward Workforce program will recruit, mentor, and train residents of Massachusetts, particularly southeast Massachusetts, Cape Cod and the Islands, for careers in the Commonwealth’s new offshore wind as part of an effort to build a skilled offshore wind workforce centred in southeastern Massachusetts. The $3 million Marine Mammals and Wind Fund will fund development and demonstration of innovative methods and technologies to enhance protections for marine mammals as the offshore wind industry continues to grow.