CENOVUS: New Board of Directors

Cenovus Energy Inc. (TSX:CVE) (NYSE:CVE) announced that at its annual meeting of shareholders held on April 25, 2018, each of the 12 nominees proposed as Directors and listed in its Management Information Circular dated March 2, 2018 were elected as Directors. The detailed results of the vote are set out below: 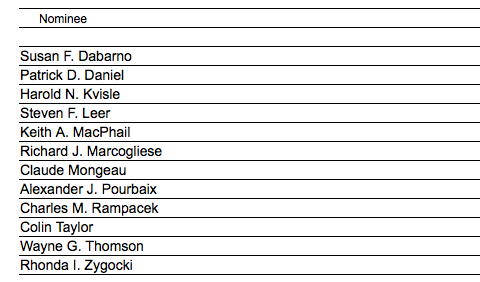 Cenovus welcomes Harold N. Kvisle and Keith A. MacPhail as new members of its Board of Directors. Mr. Kvisle and Mr. MacPhail bring a wealth of oil and gas experience at both the executive and Board level.

Mr. Kvisle served as President and Chief Executive Officer of Talisman Energy Inc. from September 2012 to May 2015 and was a director of the company from May 2010 to May 2015. From 2001 to 2010 he was President and Chief Executive Officer at TransCanada Corporation. Prior to joining TransCanada, Mr. Kvisle held engineering, finance and management positions with two other Canadian oil and gas companies. He is currently Chairman of ARC Resources Ltd., a director of Cona Resources Ltd. and a director of Finning International Inc.

Cenovus would like to extend its sincere thanks and best wishes to Ian W. Delaney, who has retired from the Board of Directors. Mr. Delaney has been a Director since Cenovus’s inception in 2009.

Cenovus Energy Inc.
Cenovus Energy Inc. is a Canadian integrated oil and natural gas company. It is committed to maximizing value by responsibly developing its assets in a safe, innovative and efficient way. Operations include oil sands projects in northern Alberta, which use specialized methods to drill and pump the oil to the surface, and established natural gas and oil production in Alberta and British Columbia. The company also has 50% ownership in two U.S. refineries. Cenovus shares trade under the symbol CVE, and are listed on the Toronto and New York stock exchanges. For more information, visit cenovus.com.