Newfoundland: The Land of the Portuguese King

This year Canada celebrates 150 years as a nation and when looking back and understand Canada’s rich history, we begin to understand its cultural diversity.

There is a plurality of cultures that has set the foundation for the cultural heritage that molds together Newfoundland and Labrador. Revealed in the songs, dishes, crafts, houses and location names, you find little snippets of the past, that tell a story of who the people are and how we came to be here.

I’m an immigrant of Newfoundland and I have been living here for several months, experiencing this rugged island. I find myself surrounded by majestic scenery, stunning shorelines and a new scene outside my window every time the weather changes. The people are friendly and welcoming and they make me feel at home. It was here that I saw snow for the first time in my life and I loved it.

I am Brazilian, the daughter of a Portuguese mother, and that’s why I always say I am Brazilian-Portuguese. I came to this province with my husband who’s studying at Memorial University of Newfoundland and Labrador. We both have strong foundations in the oil and gas industry and plan to expand on that foundation here in Newfoundland. But for now, as you can see by this article, I’m also a bit of a writer.

Since Portuguese is my mother tongue, I find myself being drawn to the many signs of Portuguese presence here on the island. I’ve seen Portuguese street names, monuments, and statues commemorating the presence of my mother’s people. I saw the Portuguese influence in the fishery, in trade, in family names, in outport names and also in the culinary delights in dishes such as the “bacalhau fresco” (fresh cod fish).

I was curious. How did my mother’s people, the Portuguese, get here? Why such a strong influence, when geographically we are so far away? As I looked for the answers to those questions, a story began to unfold. A story of spirit, adventure, perseverance and global trade.

To understand the beginning of Portuguese influence in Newfoundland we have to return all the way back to the XV century when the pioneering spirit of early explorers set their sights on the Atlantic Ocean.

Two years after the arrival of Christopher Columbus in America in 1492, Portugal and Spain started the negotiations to solve the dispute over the ownership of the newly discovered lands of the New World. As a result, the Treaty of Tordesillas was signed, whereby the world was divided into two areas of exploration. An imaginary meridian line was drawn over the globe.

This first line was located 370 leagues (1786 km approximately) West of the Cape Verde Islands, in Africa. All land located from this line to the east of the line would belong to Portugal, and the land to the West, Spain.

Some researchers state that the island of Newfoundland appeared even earlier than the arrival of Christopher Columbus in America. The North Atlantic Chart of 1424, accredited to the Venetian cartographer Zuane Pizzigano, seems to depict the island of Newfoundland and Nova Scotia as the “True Antilles”, according to the article “The Nautical Chart of 1424” (1953), by Armando Cortesão.

Today, the discovery of Canada remains a great debate. It is known, however, that the Vikings, Portugal, Spain, France, and England were amongst the candidates for the unveiling of this ‘new found land’.

Even though traces of Viking colonization were found in Atlantic Canada 500 years before Columbus, the actual true claim to the discovery of these Canadian properties remains uncertain, due to a lack of documentation and research for the times.

There are two strong theories for the discovery of Newfoundland:

2. The arrival of Portuguese in Newfoundland and Labrador years before.

What substantiates the second theory of discovery, are two additional hypotheses:

1. The first, and less known theory, proclaimed by Jaime Cortesão, states that the Atlantic Ocean was explored earlier by Diogo de Teive. After arriving in 1452 at the “Mar dos Sargaços” (Sargasso Sea) and “Ilhas do Corvo e das Flores” (Flowers and Crow Islands), he could even have reached the coast of Newfoundland and Labrador, according to the interpretation of some of his notes.

2. The most known and accepted second hypotheses is that the Canadian Atlantic lands were discovered in 1472, by João Fernandes, a Portuguese sailor who offered the Portuguese King Dom Manuel I (1469-1521) his services to explore these new lands. By consequence, he would deserve the title of Captain of such. In October 28th of 1499, the offer was accepted by the Portuguese Crown, resulting in a journey that took nearly three years, performed by João Fernandes accompanied by Pedro Barcelos.

Looking at the map “Mappa da Bibliotheca de Oliveriana de Pesaro”, it can be seen the writings “Cavo Laboradore e Insula Laboradore” (Labrador Cape and Labrador Isle), as the geographic name of the region in 1501. The name of the location was the same as that of which João Fernandes was popularly known, Labrador. Documents from that time indicate that an expedition arrived between the years 1499 and 1500 and mentioned João Fernandes as “Labrador”, which is a corruption of the word “lavrador”, that means a landowner or farmer in Portuguese.

Terra Nova: The land of the Corte-Real

The isle of Newfoundland, known at the time as “Terra Nova” or “Terra dos Bacalhaus” (Land of the codfish) was visited by João Vaz Corte-Real between 1472 and 1474, as documented by Gaspar Frutuoso in his book “Saudades da Terra” (1590). Although João Vaz Corte-Real is cited in that work, one of his sons, Gaspar Corte-Real, was the one known by his journey to the island. In 1501, Gaspar returned to “Terra Nova”, accompanied by three vessels. Gaspar’s ship disappeared. This led to rumours about his drowning. According to historical data, around 1502, Gaspar’s brother, Miguel Corte Real went looking for him without success, disappearing as well. As a result of these journeys, the names “Terra dos Corte Reais” (Land of the Corte-Real) and “Terra Del Rey de Portugall” (Land of the King of Portugal) started to show on European maps, such as the Cantino Planisphere and Pedro Reinel map. 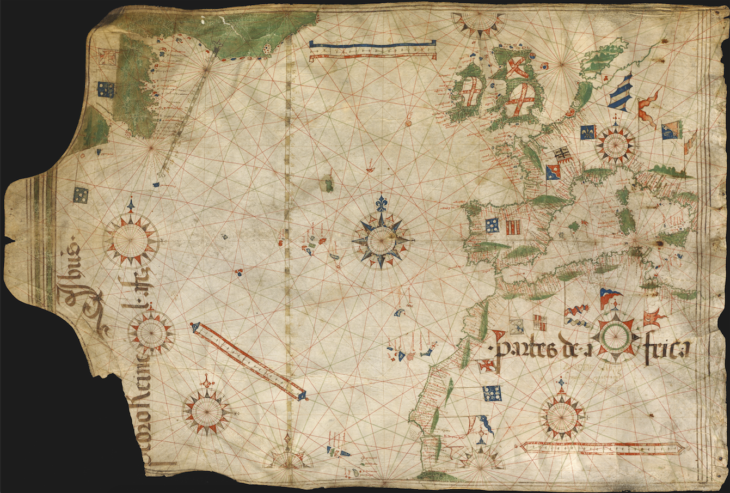 In 1965, Portugal donated a statue of Gaspar Corte-Real to Newfoundland as a token of Portugal’s appreciation for Newfoundlanders hospitality toward the Portuguese fishermen. The statue stands in front of the Confederation Building in the capital city of St. John’s today.

Unveiling the past for the future generations

The study of the connection between Portugal and Newfoundland and Labrador demonstrates the deep interest of the Portuguese Crown on the Atlantic Canada land and its resources such as fish and wood.

Despite the important and meaningful presence of the Portuguese heritage here, it didn’t prevail as strongly as it could, except for the cod fishery that kept the Portuguese vessels coming back regularly, even with fishing restrictions imposed by the England Crown.

Nowadays, it is still possible to meet Newfoundlanders who remember stories about the Portuguese, be it in the memories of soccer gaming on the old St John’s wharves, traditional accordion songs or even the big Catholic procession of the Portuguese fishermen sponsored by the Basilica of St John’s in the 50s. 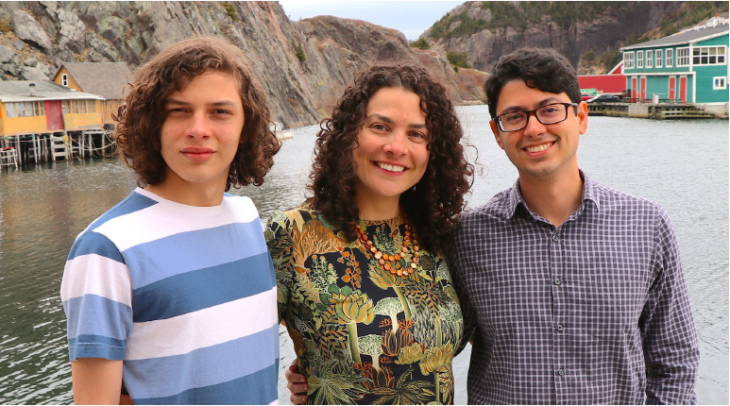 Little bits of Portugal in Newfoundland

The richness of Newfoundland and Labrador’s Portuguese past lines the coast of its warm culture. Each word, a clue to where we have come from. The name “Terra Nova” is Portuguese, not Spanish (“Tierra Nueva”), Italian (“Terra Nuova”) or French (“Terre Neuve”).

My husband and I are both educated in the petroleum industry, and our studies have given us not only the understanding of the complexities and importance of this oil and gas world but also the perception of the importance of our past in our actions. Like our fathers before us, we remain explorers and voyagers.

Honored to be here, our Portuguese roots and the current Newfoundland culture, synergistically meld together in what we now call, “home.”