Berg and its client partner, Billings, Montana-based GTUIT LLC, teamed up to develop the GTUIT Wellhead Gas Conditioning System, a technology that captures and processes associated gas from oil production. In turn, it reduces emissions, creates usable energy, lowers maintenance costs, and provides new sources of revenue. With this technology, there is no reason for oil and gas companies to flare wellhead gas under normal operating conditions.

Venting and flaring of wellhead gas is responsible for a major contribution of greenhouse gas (GHG) emissions globally, and it is one of the biggest challenges facing the oil and gas industry today. An estimated 10 per cent of GHG and 30 per cent of Volatile Organic Compounds (VOCs) emitted in Canada due to flaring, venting and equipment leaks. Flaring releases carbon monoxide, carbon dioxide, soot, methane, and other VOCs harmful to the environment. Producers that do so are also literally burning money.

Berg and GTUIT are bringing an award -winning solution to Canada that has been developed and proven in the harsh environment of the Bakken region.

In a typical oil production process, oil is pumped from the ground and sent to refineries for further processing. The associated gas that would normally be flared, can now be collected by GTUIT’s system. The irregular flow of the gas is normalized using proprietary flow controls and is compressed. After the compression, the system takes advantage of Berg’s expertise in industrial refrigeration and cools the gas down to -40 degrees Celsius.

Taking advantage of the physical properties of the different compounds in the gas, the process liquefies the heavier carbons including propane, butane, and hexane into a natural gas liquid stream known as NGLs. The residue gas is a dry methane that can be effectively used for power generation, further compressed for CNG or LNG, or introduced back into the well for artificial lifts.

To maximize customer benefit, GTUIT designed the system to cope with the irregular pressure and flow over the production life cycle of the well. In the beginning of production, oil wells spurt out product and generate an excessive amount of heat and then slowly cool down over time. To increase efficiency of the production, they designed a system that can also be moved around.

Two key benefits of the system are that it is mobile and scalable. It is trailer mounted, making it easy to deploy in less than 24 hours from dispatch. Multiple units can also run in parallel, for up to 5 million cubic feet of daily processing capacity. These benefits allow for processing capacity that is optimized to match the production at any stage of the well’s lifecycle, ensuring no disruption to oil production.

Since the technology’s commercialization in 2013, it has captured more than 600,000 barrels of NGLs while processing more than five billion cubic feet of wellhead gas. Almost 200 thousand tons of carbon dioxide and 100 thousand tons of VOCs have been diverted from the atmosphere.

With support from Berg, GTUIT recently developed the Fuel Conditioning System (FCS). A new application of the core technology, the FCS allows for cost effective on-site power generation when the well is isolated from utilities. The dry residue gas can be used to efficiently run natural gas power generators to reduce the operator’s dependency on expensive diesel fuel.

Natural Resources Canada’s new Energy Innovation Program (EIP) was launched this year in support of the Federal Government’s trilateral commitment with the U.S. and Mexico to reduce methane and VOC emissions from the oil and gas sector by up to 45 per cent by 2025. The EIP provides funding to the companies developing innovative technology to support clean energy. The GTUIT Wellhead Gas Conditioning technology reduces methane emissions, providing a key solution to this program.

In November 2015, Alberta unveiled its new Climate Leadership Plan, a climate change policy designed to reduce emissions in the province. It requires companies to pay $20 per tonne of carbon emitted in 2017, moving to $30 per tonne in 2018. The regulations come into effect for on-site combustion by oil and gas producers in 2023. Companies will have to find a way to reduce emissions or pay.

GTUIT recently reached an agreement with Vancouver based Finning Canada Inc., to own and operate the wellhead gas conditioning systems and lease them to Canadian oil and gas customers. As an operator on-site, Finning provides quality service and contributes toward reducing the producers’ environmental impacts. They hope to assist their existing customers to use the chilling technology to make Canadian companies greener – and more profitable. 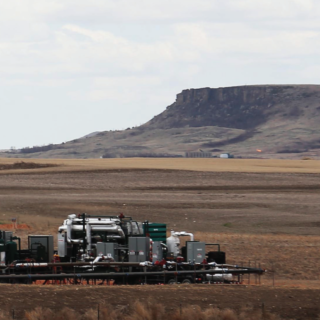