When the price of oil goes down it’s time to INVEST!

As the Oil & Gas business slows, certain economic opportunities arise. When the price of oil is mostly stable for an extended period of time, like it has been from 2006 to 2014 (hovering between $60 and $90 per barrel), the US energy industry becomes accustomed to certain levels of income. Thanks to human nature, oil people begin to believe that the price can never drop again. Of course, when that income is interrupted, oil producers, suppliers and the support industries begin to liquidate assets to meet their obligations. As a result, cash buyers are presented with tremendous low-risk opportunities that can create wealth for generations.

At a family Office conference recently, I was visiting with a family who is living proof of this wealth generation. The father had used his life savings to purchase assets during the Resolution Trust days of the 1990’s. The Resolution Trust (RTC) was established by the US Office of Thrift Supervision to manage the implosion of the US Savings & Loan industry which began in July 1982 with the failure of Penn Square Bank in Oklahoma City. Penn Square was a large energy lender and the first of 139 Oklahoma banks that failed in the 1980’s – all a result of the decline of the price of oil.

This savvy buyer bought several large commercial buildings and vacant lots in a large Texas City for pennies on the dollar from the RTC. Today, those properties are cash-flowing 100% of the purchase price monthly. He reported that his family fortune had grown from $1 million to $200 million by owning and managing assets purchased during a two year period in the early ‘90’s.

If Prices Stay Low for 6 Months

Unlike the mostly efficient public stock markets, the oil business is “slow” inefficient money. Things do not happen overnight. The actions of the global oil producers that caused the decline in price towards the end of 2014 took place the second quarter of 2014, not the day before prices began to drop. If crude oil prices remain low for 6 months or longer, oil producing countries will begin to waver, affecting the global economy in a very negative way. Locally, in North America, the first thing that will happen if prices stay depressed for 6 months is that oil operators will change their short-term plans as drilling prospects and work overs of existing wells that were worth the risk at $90/barrel no longer look promising.

The net result is that operators will cancel near term plans and oil rigs will begin to be taken out of service (stacked).  In October 2015, this process is well underway, but still a work in progress. In February 2015, this had already started as the Permian Basin working rig count was down 30% from October 2014 to Jan 2015 and the skyline of Odessa Texas is littered with non-working rigs. When a rig is stacked, all the people working on that rig become jobless. Much like a small mobile

city, each large horizontal drilling rig supports 100 direct daily jobs and affects 1000’s of indirect jobs. The services of fuel, food, filters, supplies, lube oils, transportation and housing are affected as the layoffs and slowdown cause them to lose business. After exhausting their savings, out of  town laborers will begin to return to their permanent homes vacating living quarters. Towards the end of this six month period, banks will start to call personal loans and begin the foreclosure process on assets. All of these things slowly ripple up the economic food chain, eventually hitting the bottom line of hundreds of publically traded companies. Oilfield suppliers will begin to have auctions, many times selling products at no reserve for pennies on the dollar.

Here is a real world example of this fundamental truth in action. The price of oil had declined from around $40 per barrel in 1980 to a rock bottom price of $10.25 per barrel on March 31, 1986. I remember numerous times, bidding at public auctions in Midland/Odessa, Texas in the summer of 1986 when the hammer went down on millions of feet of new oilfield tubulars at cents per linear foot (assets that six months earlier were selling for $4.50 per foot). Auctions like this happened for 24 months after the price of oil declined as banks, oil companies and private lenders had to sell assets to pay down debt. Within 2 years after these sales, the assets had been turned for a significant profit. If you understand the oil business and can manage the assets, you know that certain equipment is always in demand in the field. Remember, when prices fall, the oil business does not stop, it just slows, there is always demand for energy.

One bright star in this mix: producers with experienced management, who own diversified oil production without debt will continue to receive income. Marginal wells will be shut-in, while more profitable wells with low break-even costs will be profitable, be produced and drilled.

If Prices Stay Low for 12 Months

If prices stay depressed for 12 months or more, oil operators will begin to adjust their long-term plans as they focus in on their core producing properties and drilling prospects (called high-grading the portfolio in the oil business). In October 2015, this is underway now. Oil companies with current debt will sell off very high quality, long lived producing properties to focus on their core holdings.  If prices stay down long enough, they will begin to sell core production that, in their mind, has no further development potential. At this point, a very large number of professionals will leave the energy business, never to return. Credit facilities will dry up and very low risk deals will not be funded because traditional bankers are “scared of the space”.   Tremendous opportunities will exist for the well-financed buyer as credit tightens in the industry. Assets like tank farms, pipelines and rolling stock will no longer meet market expectations and be sold by Master Limited Partnerships (MLP’s) that must adjust their capital structure and increase profitability.

Ruling Principal:  When People Are Scared, Wealth Is Created.

MLP’s will cut their distributions as the amount of product flowing through their pipelines reduces. New pipeline projects will be cancelled. Saltwater haulers and disposal facilities will suffer as operators reduce production and make cheaper arrangements for disposal forcing facilities to narrow their margins. Auctions will increase as higher quality producing properties and equipment come to market for far less than replacement cost. CASH buyers will be able to make instant deals at half appraised value, just because they can close in a week. The slow moving oilfield will SLOWLY OVERCORRECT, creating opportunity. Real estate will be purchased for twenty five percent of replacement cost. Assets will come to market via the bankruptcy court, BUYERS WILL CREATE WEALTH. Here are examples of the opportunities that are coming for the cash flush buyer in 2015/16.

A. In January, 2015, a natural gas producer was informed by his bank that he would have to liquidate the production that secured a loan and repay the debt – production that is profitable at less than $1.00/Mcf.

B. In January 2015, an operator called and asked if we would finance his purchase of 1,000,000’ of new production rods. One of his suppliers needed cash that day to pay the bank and was willing to take ten cents per foot for the same rods that had been purchased in October ‘14 for $1.10/ft.

Economic Rules That Guide Us

Below are some economic rules that make the next three years the most opportune time to buy energy production and supporting assets in the past 30 years. 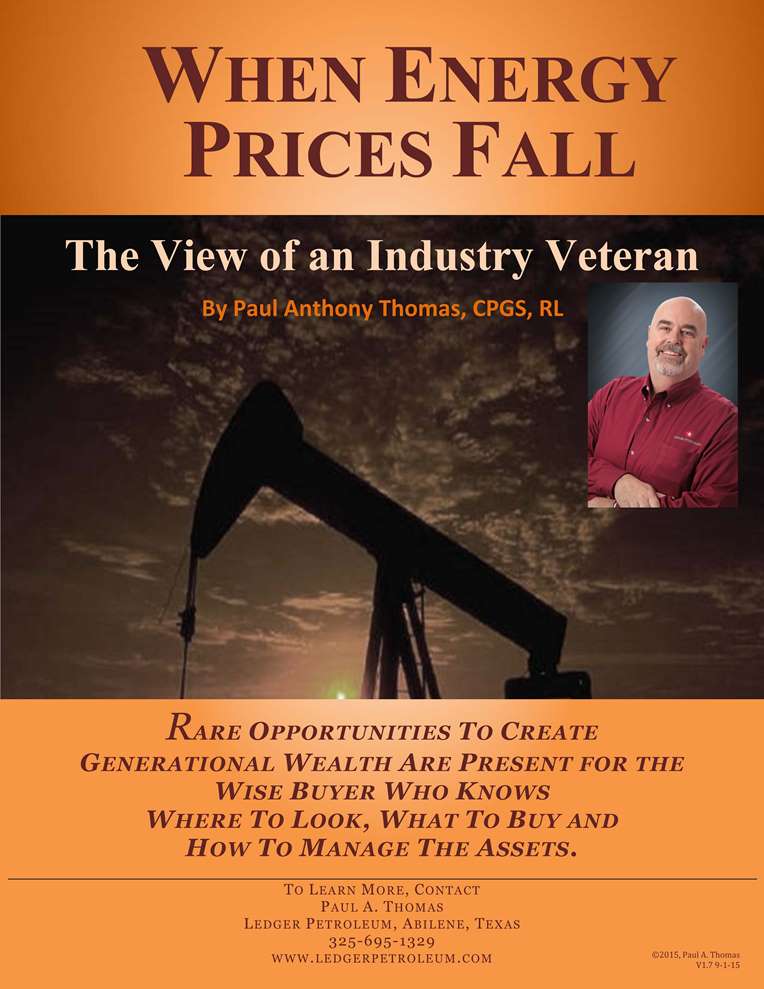