The Bakken formation stems from the Late Devonian to Early Mississippian age and occupies the subsurface areas of Williston Basin in Manitoba, Saskatchewan, Montana and North Dakota and has one of the largest deposits of oil and natural gas in the United States. As companies continue to understand the geological characteristics of the Bakken play and with further advances in completion technologies and fracturing, this area has seen one of the highest rates of development in the industry.

Up until several years ago, the domestic oil production in the U.S was declining steadily after its peak years in the 1970’s. During this decline, the Bakken formation was thought to be a minor play, as the oil and natural gas found in this area were sheltered in rock formations with low permeability and high drilling costs. What led to the unlocking of this area’s fertile zones is best explained by Mike Little, President of R-Cat Oilfield Corporation, “New fracturing technology has allowed companies to unlock the hydrocarbons economically.” Coupled with advances in horizontal drilling and pricing, the Bakken region has allowed the U.S. to obtain the energy independence it has always desired. 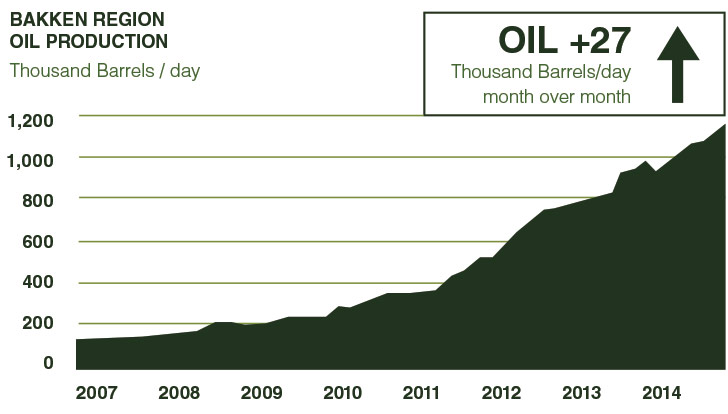 The leading producers in this area include Continental Resources, EOG Resources, Whiting Petroleum Corporation, Hess Corporation and Oasis Petroleum. In 2004, Continental drilled their first of many Bakken wells. Today, they are the leading producer and one of the major leaseholders occupying over 1 million net acres. The Bakken-Three Forks play is already one of the top producing oil plays in the United Sates with the U.S. Geological Survey estimating the region is holding over 7 billion barrels of recoverable oil not yet discovered. Continental Resources is confident they have the technical ability to recover some of these reserves and continue to test new zones and expand drilling operations. According to the North Dakota Department of Mineral Resources, over 95% of North Dakota drilling activity can be found in the Bakken and Three Forks formations, with an estimated 1,047,000 bpd produced. Of the 10,000 plus wells currently producing in North Dokata, 66% are Bakken wells.

EOG Resources Inc. is one of the largest independent crude oil and natural gas companies in the United States with 94% of their reserves located here. EOG began exploration and drilling programs in the North Dakota Bakken a few years prior and have invested $100 million on a rail terminal and $200 million in three sand mines and two processing facilities in the Wisconsin area. EOG’s ability to continue expanding their drilling programs each year has been due to their refined completion techniques which utilize sand from sand mines they own and operate. This has allowed EOG to significantly reduce well costs, improve cumulative oil production and initial production rates and they plan to almost double their Bakken activity this year.

New pipeline infrastructure and rail services are jointly working to meet the current transportation demand and preparation for future demands are pressing with analysts predicting approximately 1.3 million bpd will be produced from this region by the end of 2015. In 2007, the North Dakota Pipeline Authority was created by the North Dakota Legislature in order to support the development of pipeline infrastructure that can improve the transportation and production of energy related commodities. Enbridge’s Sandpiper Project will add more than 200,000 bpd of capacity and will be a 616 mile pipeline stretching from the Beaver Lodge Station, a current Enbridge terminal, to Superior Wisconsin. Sandpiper will allow for the transportation of Bakken crude to both US and Canadian refineries and is slated to put into service in 2016. Transportation of oil is also improving with the Bakken Oil Express Pipeline being approved early this year by the North Dakota Public Service Commission. The pipeline is expected to replace more than 800 tanker trucks on North Dakota highways and will have the potential to transport 165,000 bpd across a 38 mile pipeline to the existing Bakken Oil Express rail facility in Dickinson. The Keystone XL Project, which has the potential to move 830,000 bpd, would be another alternative to move Bakken productions to the Gulf Coast.

The United States has been able to reduce their dependence on foreign sources of oil with the rapid development of the Bakken formation. As with any area that has experienced high production rates in the oil and gas industry, the economic impact has been immediately felt by neighboring populations. The town of Williston, North Dakota has felt the benefits and pitfalls that accompany an oil town. Comparable to Fort McMurray, Alberta, Williston currently has the highest rent in the United States at almost $2500 a month after the population nearly doubled in a few short years to over 30,000 residents. The stress on the town’s infrastructure has led to soaring rent prices, issues with transient populations and crime. Other areas that have had similar impacts include Watford City and Dickinson.

With the longevity of the Bakken boom in question, the current challenges faced by companies wanting to exploit this area include, labour, transportation of oil, services and skilled labour. One of the greatest concerns affecting operations is the need for skilled labor. With employment opportunities outnumbering the number of unemployed in North Dakota, companies are pitted against one another to pursue the skilled labour to join their workforce. To do this companies have resorted to offering premium perks including above market salaries, relocation benefits, housing location and assistance with purchase or rental and flexible hours with extra holidays.

Competition for rigs and services are also at a premium in this area and will continue to be so for the coming years. Environmentally, new fracking and flaring regulations have the potential to negatively impact the production rates in the future. However, with increased overall well productivity and lowered costs due to technology advances, companies have begun to develop long term drilling programs in the past couple of years. Even though the “Bakken boom” is thought to be at its peak right now, the true potential of the Bakken formation is unknown and the outlook programs for drilling in this area have the potential to span beyond five to ten year programs.